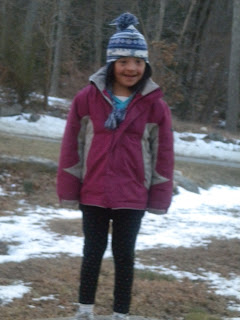 If you have come here for the first time via my guest column at Patheos, "No More 'Mental Retardation', So?" Welcome. You have found my online home, the place where Christina and I share her life publicly in order to give people an peak into ordinary life of a family with a child with Down syndrome. To dispel the myths about how difficult this is, and to put a human face on people with Down syndrome. When I was in my 20's we had the example of Corky, a teenager with Down syndrome played by Chris Burke in TV series "Life Goes On" whose mom, played by Patti LuPone, shared the ups and downs of raising a son with some limitations but endless possibilities. Now, thanks to the internet, you have Christina at Cause of Our Joy.

Its a snowy New England morning at sunrise, as the snow falls silently outdoors, and Christina is sleeping beside me, snoring gently. She doesn't know it yet, but today is a snow day. She will be thrilled, she has all day to spend playing in the snow chasing our golden retriever Molly,  or cuddled up with her sisters under blankets on the couch watching our latest family DVD, "Despicable Me". She has learned to imitate the nerdy villain Vector's signature move, swaying her hips as she pulls down her clenched fists saying "Oh YEAH!" It never fails to crack us up.
My toes curl in anticipation of the fun we'll have, but as a writer mom, I have to steal a few precious moments to record the joy. For you, for my distant family members, and for posterity. Christina is an endangered species, and this thought started my writing career in 2005, when she was three.
I had tried to share about being the mother of a child with Down syndrome in other, more personal ways, through my pediatrician, my local hospital, my OB, but my offers to mentor other mothers were met with stony silence. I didn't pretend to offer medical advice, just the everyday stories from one mom to another. 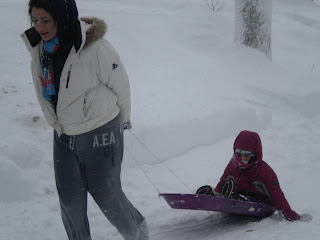 I remembered how much help Margaret was to me, when as the anxious mother of a newborn with Down syndrome (I had refused pre-natal tests on principle) a priest from my parish phoned me and offered her phone number as a resource. She answered my fevered questions with a calm, matter-of-fact attitude which in itself calmed my fears. Her daughter, Kristin, was a busy, happy 20 year old. She graduated high school, was adored by her 9 siblings, was Godmother to various nieces and nephews, and each day, walked to work in her local bakery, where she bags bread. She never missed a day of work, and was planning a huge 21st birthday party. Life was full of ordinary happiness for this extraordinary young woman.

So, when my attempts to share Christina's story were frustrated, my mother came to the rescue. She gave me a book, "Life is a Blessing" the biography of French geneticist and Servant of God, Dr Jerome Lejeune. It was written shortly after his death by his daughter Clara as a memoir for her newborn daughter, and it became my inspiration. Dr Lejeune discovered in 1958, that Down syndrome was caused by an extra copy of the 21st chromosome. He dedicated the rest of his career as a doctor and researcher to finding a cure for this disorder. Not because he felt that our children were inferior, but because others did, and when abortion was legalized in France, children with Down syndrome became an endangered species. He died in 1994 from cancer, feeling that he was abandoning his patients. Eleven years later, I felt a call to make this legacy known, not just for the promise of a cure from the effects of Trisomy 21, but so that society might learn from his love of our children to value them as they are. 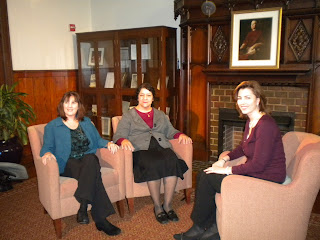 Writing for six years has led to me to Hollywood, where, on the Fox Movie Lot, I attended an opening for "Mr Blue Sky" a film about a young lady with Down syndrome who married a typical man. It brought me to Washington, where, for three years, my friend Eileen and I have led KIDS (Keep Infants with Down Syndrome) in the March for Life. This year, I am going to be interviewed for the second time on EWTN(this photo is of Eileen Haupt and I with "Faith and Culture" series hostess, Colleen Carroll Campbell in St Louis this November), as part of the March for Life Coverage. For three years, I have been collecting stories of Catholic famlies who are blessed with a special needs child for a book entitled, "A Special Mother is Born" to be published by WestBow Press this winter. I have published articles on Down syndrome research and Dr Lejeune in various periodicals and websites, and appeared as a guest on podcasts and radio shows. When you say "yes" to God, despite your lack of time and  your keen awareness of your personal shortcomings, He does amazing things. Sometimes, I still have to pinch myself, saying, "Is this really my life?"

But despite all these amazing events, last weekend, an event in New York City, within an hour from where I grew up on Long Island, was the pinnacle of my experience as a writer/advocate. I was able to hear Clara Lejeune Gaymard, the daughter of my hero, Dr Jerome Lejeune, give a talk about her father's life. And afterwards, I was able to interview her for the National Catholic Register. As we completed the interview, Clara shared how although her father's cause for canonization, opened on June 28, 2007 has not had any official cures yet to advance him to beatification, there have been many people whose lives he has profoundly changed after his death. I told her mine as one of them, and the thrill in her eyes, as I told her it was her book and her father's example which inspired me to begin my long delayed writing career, was the greatest honor I have achieved. I met Madame Lejeune, the late doctor's widow, and her other daughter Karin, both of whom warmly embraced me as part of the family. They embraced me first of all because I have a daughter with Down syndrome, then for my contribution to Dr Lejeune's legacy with my article Down Not Out.
Look at this photo of my worn copy of "Life is a Blessing". My mother, Clara, and her mother have all signed it. It is treasured evidence of God's work in my life,and on behalf of our children.
We are a family, those of us who are working to further his legacy and save the children he called his dear little ones.Now the Foundation Lejeuene is opening a branch in the US, in order to help fund over 91 research programs which it supports here. None of these researchers use embryonic stem cells, and many are quite promising.I will keep you posted on the Foundation's progress here, and tell you how to donate.
At the March for Life, I will be hading out thousands of pamphlets with 21 sayings of Dr Lejeune. I will be posting them one by one here.
But I have to stop now. Christina is stirring, and soon another day with her will begin. Thank you for taking time to read this. Look out for news of the publication of my book A Special Mother is Born. Mother Mary Agnes Donovan, Superior of the Sisters of Life wrote an amazing foreword, former Senator Rick Santorum has a chapter about his daughter Bella, and my story of Christina, is accompanied by 31 stories of emotional courage which make me proud to wear the badge of special needs mother. Some are professional writers whom you will recognize, like Barbara Curtis, Jelly Mom Lisa Barker,  and Melissa Wiley. and all are heroes of their domestic church.
Leave me a comment below to say 'hi', and spread the word. Our children are blessings to the world, but first of all to their families.

WGorgeous, moving testimony, my friend! With how much richness has God not blessed you, our little Christina, and your family!