What have we learned in 70 Years since the Auchwitz Liberation? 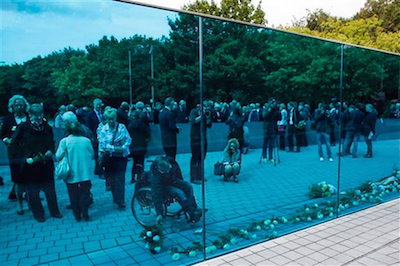 Over 70 years ago, the German government with the cooperation of doctors target a segment of the population for death based upon their genetic makeup and carry out a plan of extermination with the parents as participants, at times forcing the public to fund this  program.

Hitler started the T4 Program which employed doctors of the Third Reich to target the handicapped and mentally ill for destruction. They were labelled 'useless eaters' who ate food which should be going to the soldiers.
The doctors slated these people for death by putting a check next to their name on the roster. No violent raids and noisy arrests of the Concentration Camps, merely a simple check-mark by a physician, and that unfortunate person was shipped in the  busloads of so called "useless eaters" to killing centers for the first gas chambers.

Eventually the German people began to wonder about the ashes which flowed from the crematoriums. The Church protested and then Hitler took the program underground and the disabled were starved, left to die of exposure or given a lethal injection, after which their families were informed by letter of their demise of some illness.

Not enough protest led to the Holocaust of millions we commemorate today.

We were not taught about the T4 Program in school. In fact only recently has a memorial been erected to the 200,000 victims of the Program. (See photo) Why the silence?  We say "never again" to this genocide 70 years afterwards but do we truly mean it?

Statistics on abortion for babies prenatally diagnosed with genetic anomalies like Down syndrome range between 75-92%. If its not government targeting a population, then someone surely is.

They are killed silently by doctors in medical institutions,  just as the children and adults in the T4 Program were killed by doctors in institutions. Many of the victims of the T4 Program were handed over to the state by their families ( a notable exception was the 14 cousin of Pope Benedict who had Down syndrome and was forcibly removed from his family in 1944 and died within the year).

Abortions of the disabled today are done with the mothers' consent.

The media and society at large are largely silent about this, ignoring well more than  half a million people who protest abortion every year in DC and around the nation. In the meantime,  we have found better and more efficient means to select babies with disabilities for abortion earlier in the pregnancy. A quarter of mothers whose baby was prenatally diagnosed with Down syndrome say that their doctor insisted that they abort their baby.

It gets even worse.

Medical doctors and self proclaimed bio-ethicists are even arguing for "Post-birth abortion" in case a 'useless eater' slips through the net. Former Surgeon General Joycelyn Elders suggests that pre-natal testing and abortion of babies with Down syndrome saves the government money.
Where have we heard that before?

Not even 20 years after the Holocaust, the US  government, with the cooperation of doctors target a segment of the population for death based upon their genetic makeup and carry out a plan of extermination with the parents as participants, at times forcing the public to fund this  program.

We have learned nothing.  Shame on us!

My post is up on the March for Life blog

Here is the link
Posted by Leticia at 12:00 AM No comments: Links to this post