I am proud of the Sisters of Charity of Our Lady, Mother of the Church, who have always been involved in Haitian relief efforts, long before the current earthquake. Each year, at St Joseph School, the members of a medical relief group in Haiti would show slideshows of their work and encourage the children to raise money and send cans of food to Haitians.
But since the earthquake, they have doubled their efforts as I write in my recent article in my diocesan newspaper, Four County Catholic. Look for the article on page 14.

Posted by Leticia at 2:01 PM No comments: Links to this post

Growth Charts are being developed for our chlidren 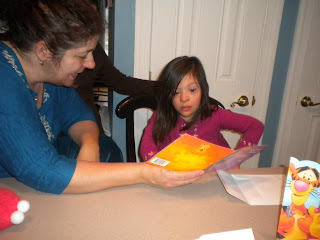 This has always been a pet peeve of mine; when Christina saw a pediatrician for a checkup, her height always put her at the lowest percentage for growth rate for children her age. "Why don't they make growth charts for children with Trisomy 21?" I would complain to the pediatrician, who would shrug in response. (It turns out that there were old charts, but few physicians knew of them.

It bothered me that our children were "off the chart". If felt as if the medical profession had washed their hands of them once pre-natal diganosis was put in place, as if they were saying to those of us who had our children despite dire warnings from obstetricians and pressure to have amnio, and then abortions, "look, lady, we gave you a way out of having this baby, and you refused, so now YOU deal with the kid".

I know I'm not paranoid, because, until the Congressional Down Syndrome Caucus teamed up with parent advocates, the National Institute of Health did not even have a plan to pursue research related to Down syndrome. It was considered merely a matter of prevention (ie "Search and Destroy"). Not only do we have a research plan now, but we have a research budget. And now, brilliant researchers like Dr William Mobley at Stanford, and Dr Roger Reeves at Johns Hopkins, have come up with therapies to possibly mitigate the cognitive and memory delays within the next decade. There may even be benefits for those typcial people who have cancerous tumors. Something about that extra 21st chromosome starves cancerous tumors, thus Trisomy 21 'sufferers' rarely get them.
It's great to see people like Christina becoming more accepted into society. They are now "on the charts".
And new approaches to treating the symptoms of Trisomy are being discussed.


"If we can better understand the growth patterns and the rates of other illnesses that co-occur with Down syndrome, researchers may be better able to plan treatment and design preventive health programs," added Zemel. "The CDC has recognized updated growth charts as an important tool for people providing health care to children with Down syndrome." In its grant guidelines, the CDC states that new growth charts produced from the study will be broadly distributed free of charge.

Posted by Leticia at 5:46 PM No comments: Links to this post

Just because its springtime: "Annie's Song"

Posted by Leticia at 9:44 AM No comments: Links to this post

The 63rd anniversary of the breaking of the color barrier in baseball in 1947 was celebrated at Yankee Stadium yesterday, when all players wore number 57 in honor of Jackie Robinson, the first African American to play in Major League Baseball. His memory is honored in this wonderful family film, released today called
The Perfect Game.
This wonderful film with an all star cast has the most positive portrayal of a priest I've seen in 40 years. 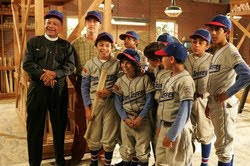 Catholics must see this film which tells the inspiring story of how the Mexican Little League team, the Monterrey Industrials swept the 1957 World Series in Williamsport, PA, thanks to the mentorship of their parish priest.
Cheech Marin does an outstanding job as Padre Esteban, you HAVE to see that to believe it!

Posted by Leticia at 9:38 AM No comments: Links to this post

With the internet, you never know where you will end up

I have a self indulgent habit; from time to time I Google myself. I want to know where what I write online is going Here are some recent surprises.
My review of "The Kite Runner" was used in The Manila Bulletin as the basis for a discussion on the Sacreament of Confession, according to St Jose Maria Escriva. Awesome.

KIDS was featured in this wonderful article about the 90% abortion rate of babies with Down syndrome.
Again, a pleasant surprise.

My article in the National Catholic Register on the Legacy of Dr Jerome Lejeune was quoted by Michelle in her excellent and holy Unborn Word of the Day. I left a comment at the time, but I had forgotten about it, and to see it there was a renewed thrill.

And.. . saving the best for last; my review of "Mother Teresa's Secret Fire" by Fr Joseph Langford, MC is on the website of the Missionaries of Charity.

When I get discouraged about how little money freelance writing has brought me, I look at the ways my writing has been used, and remember that using my gifts for God's glory is a higher purpose.

Posted by Leticia at 10:24 AM 4 comments: Links to this post

The daily news from school

In her backpack, Christina's teacher sends home a daily report, to tell me if Christina ate, worked, played well with her friends, finished her work and generally cooperated at school. I often hear about her being physical with other students, pulling hair, etc, but sometimes, there are good surprises.
Her teacher wrote,
"A boy in her class chose to be her partner for music, because he said, 'Christina is, like, learning stuff":
I am still smiling from that one.

The way Down syndrome is understood has undergone a radical paradigm shift, according to researchers, and this will open up five new therapies for the cognitive delays which accompany it.


The researchers also showed that manually manipulating pieces of RNA that regulate the protein could increase protein levels in both human cell lines and mouse brains. In fact, an experimental drug that acts on those RNA segments returned this protein to normal levels in mice that model the syndrome.

We could be on the brink of a drug which treats Down syndrome, and, God willing, lowering the negativity which accompanies a pre-natal diagnosis Down syndrome. While many parents of a child with Down syndrome resent any treatment which is aimed at 'changing' our children, I maintain that anything which helps more children come into this world is a blessing.
If its proven safe, I would be open to Christina receiving such treatment. I have advocated long and hard for research funds to bring us breakthroughs like this. This is good news. Servant of God, Dr Jerome Lejeune must be praying for his fellow scientists.
Read the entire article here.

"Last in this world, first in the next"

Sherry Tyree, a writer from the St Louis Dispatch is not afraid to tell the truth about Down syndrome. About how many babies are aborted after 'genetic testing' and about how they are appreciated somewhere. The Catholic Chuch.
You can tell she is a decent person by the reason she left her OB;


A few years back, for a variety of reasons, I left my ob/gyn. The parking was difficult, the doctor was perennially late, but primarily I quit because to the left of her office door was a long hall and a portal above which hung a large sign, “GENETIC TESTING”. In my mind it might as well have read “ABANDON HOPE ALL YE WHO ENTER HERE”.

That is an apt description of many an OB office, where, after a pre-natal test reveals an anomaly. Then the pressure begins. The negative list of possible complications, without a mention of the special gifts these children bring, the threats about what a child like this will do to their famlies.Abondon hope, indeed.

That is why the voice of the Catholic Church is a light in this world for people with Down syndrome. We look beyond the obvious, the disease, and see the spirtitual richness. As Jesus says, "unless you become as little children you shall not enter the Kingdom of God". What a blessing it must be to never lose the simple heart of a child, a heart which loves unconditionally, without complications, and with gusto. That's why certain cultures consider those with Down syndrome to be angels in disguise. Let those who have the eyes of faith see, and help uncover the blinders from those who would judge our beautiful children "life unworthy of life".

Posted by Leticia at 9:23 AM No comments: Links to this post

Good Friday; The anniversary of our salvation 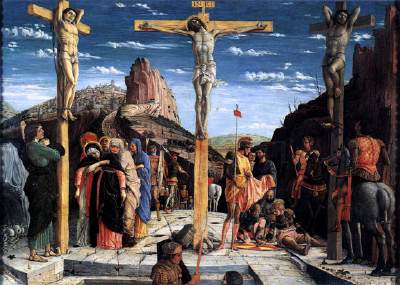 Here is a link to the Divine Mercy novena which begins on  Good Friday and ends on Divine Mercy Sunday.
We are attending the Triduum Masses as a family, with houseguests, so we drive a caravan to church .
I am enjoying singing in the church choir. It adds so much to the meaning of Holy Week to sing; Pange Lingua, Missa del Angelis, Mass of the Blessed Sacrament, Ave Verum (Mozart), Panis Angelicus, Ubi Caritas, O Sacrum Convivium, O Sacred Head Surrounded, Palestrina's The Strife is O'er, and Jesus Christ is Risen Today.
Preparing this ethereal music has been a blessing, I haven't been in such a great choir since high school when we sang the Mozart Requiem and the Bach B Minor Mass. Thank you Lord for the beauty of the Mass augmented by 2000 years of musical  masterpieces.

Posted by Leticia at 11:40 PM No comments: Links to this post