If you missed us on "Faith and Culture" the first time, here's your chance 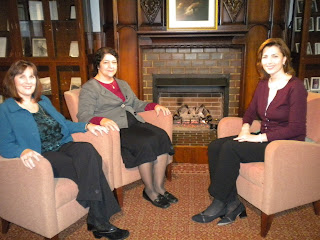 Show host Colleen Carrroll Campbell just informed us that EWTN is re-airing our "Faith and Culture" interview on the following dates and times, according to the online schedule.
Sunday Sept. 18 at 5:00 PM EST,

Monday Sept 19 at 2:30 PM EST
Wednesday Sept 21 at 11PM EST.
Its called "Keeping Infants with Down Syndrome".
If you miss this, its not archived, you'll have to purchase the DVD in the EWTN Catalogue.

Posted by Leticia at 7:30 PM No comments: Links to this post

I wrote a few reflections on the poignant meeting of the Holy Father with disabled youth in Madrid. Its over at Catholic Vote.

Posted by Leticia at 4:29 PM No comments: Links to this post

Down syndrome achieves meets with Congressional members about NIH funding

This is a subject dear to my heart, obtaining fair funding for Down syndrome research.
There is an average of $100 spent for each person in this nation who has Down syndrome, while for other diseases like Cystic Fibrosis, its more like $4,000 according to the Alan Guttmacher institute.
But Down Syndrome Achieves met with our friend Cathy McMorris Rogers (R-WA) to discuss how this can be remedied. 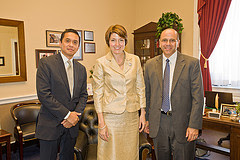 Against the backdrop of the debt ceiling crisis, DownSyndrome Achieves was there working with Congressional leaders to build a more meaningful and substantive national strategy for Down syndrome.

When I learned that my book, "A Special Mother is Born" would not be available for another month or two, I was discouraged. I had big plans to market the book at the Catholic Marketing Network and the Catholic Writer's Conference Live which occured simultaneously in the Valley Forge Conference Center last week. Yet, I remembered last year's conference, and the support which CWG members gave one another, and decided to attend anyway, just to see my friends.
Leaving the girls at Dad's house, I arose at dawn on Wednesday the third of August, packed the van and headed for the conference. Despite being a bit too tired for an adventure of this magnitude, the trip was going smoothly, until I hit New Jersey. I smelled burning rubber through the van window which is stuck open. But then, I was in New Jersey, passing oil refineries. Soon however, it was obvious that my 11 year old van was contributing to the smells, and decided to get off the New Jersey Turnpike. By the time I was at the tollbooth, the right front tire was smoking so badly I got away without paying the entire toll, I think the toll taker was afraid his life was in danger! I pulled into the nearest parking lot and called my husband. He had no idea what was wrong, so I asked the hotel clerks where to find a mechanic, fearing what would happen. I pictured a dishonest man anxious to fleece a hapless woman with a smoking car far from home.
But it wasn't necessary. When I started up the car, the wheel was fine. I cautiously drove the rest of the way to Pennsylvania, wondering why things were suddenly resolved. It must have been my frantic prayers, coupled with that of my husband. The car has been fine since.
I checked into the local discount motel which was in the middle of a highway interchange, and though I was thrilled with the reasonable price, the sparseness of the lobby and the fascinating clientele made me wary about returning there to sleep in the evening (oh and what was that odor emanating from the carpet?). I forced the thoughts out of my mind. I was travelling on a shoestring budget, there was no money for luxury. Mom's big conference was no luxury junket!
When I arrived at the Valley Forge Conference Center, I was soon greeted by my friends, shared my story and settled into the conference. I met Viper author John Desjarlais, and CWG President Ann Lewis, and forgot my troubles. I attended Michelle Buckman's intense writing workshop and immersed myself in the craft of writing. Her literary insights were so intense that soon, happy memories of my first class at college; Freshman Introduction to Literature came flooding back. High in the century old Administration building, Professor Askin taught English majors the secrets of great literature. We felt ourselves a priveleged group, feverishly taking notes as we delved into the riches of English literary tradition. We were no less priveleged, that morning in Valley Forge, as the top female Catholic novelist taught us the secrets  of her stunning literary success. Her latest book "Rachel's Contrition" topped the charts in female fiction in Amazon the past year, and won the CWG's first "Catholic Arts and Literature Award" that year.
The idea of a novel, which I once considered a mere day dream for me, a non-fiction writer,  began to take shape in my mind, thanks to Michelle's specific guidance on how to make a character come alive. My main character, Andres Keller, began to haunt my thoughts in the corridor of the hotel, taking shape on his own, nagging me to put him down on paper. Is that how novels are written? I wondered.
An evening of entertainment pushed Andres to the back of my mind; we saw "The Mighty Macs" and "Courageous" which kept me alternating between hearty laughter and actual sobs. I sat alone and was exhausted on my trip to the motel, which should have taken five minutes, but, thanks to a confused GPS, was more like a scavenger hunt. I travelled 23 miles to the motel a mere mile away!
When I finally reached it, I was dismayed by the atmosphere; an outside door was propped open to let in rowdy truckers who apparently were long lost army buddies by the tenor of their celebration, which occupied most of the first floor, where my room was located. I snuck in,carrying only the clothing I would need for tomorrow, hoping to escape an invitation to join them. I was so happy to escape unnoticed by the partiers, that even the sour smell of the stained blue carpets in my room, failed to discourage me as I double locked the door. zzzzzzzzzzzzz I fell asleep before hitting the hard mattress of my bed.
To be continued. . ..

Posted by Leticia at 10:35 AM 2 comments: Links to this post