Two Saturdays ago, at the suggestion of Heidi Hess Saxton, my former editor of Canticle Magazine, a xolumnist at Catholic Mom, and 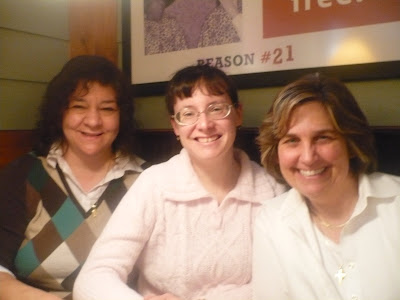 founder of the Extraordinary Moms Network, I had a Catholic writer's luncheon. It was a blast!

I had the pleasure of meet in two Catholic authors whose columns I admire on Catholic Mom: Patrice Fragnant-McArthur who blogs at Spiritual Woman(next to me) and Pat Gohn, who blogs at Write In Between and has started up a podcast called Among Women. Pat Gohn has a background in radio, and worked on Long Island, in two stations close to where I grew up, but transferred to Boston in the 1990's.

We discussed their Master's degrees in Theology (I am considering this but time and finances are limited) being a Catholic writer, and how we hope that our writing help to evangelize the culture. We spent two hours together, and the time flew by. I hope we can get together again sometime soon.

We recorded a podcast right there in 99 Restaurant near Worcester, MA. When it airs, I'll be linking to it here.
Posted by Leticia at 4:14 PM

Wasn't that a fun time?! Thanks for posting our picture -- thank God that ONE of us had the good sense and foresight to bring a camera! Way to go, L.!

Anyway, I'll be looking forward to sharing that conversation with your readers on the "Among Women" podcast in the next few weeks... in the meantime, perhaps your readers would like to check out the three episodes that are already available up at iTunes or at www.amongwomenpodcast.com. Also, find a link on Facebook!

Pat, thanks for the link, I'll add it to Catholic Media Review.

That reminds me to return to Pat's excellent blog, and I will also check out Patrice's! It is such a blessing to be among like-minded women and I'm glad you were able to get together like that!

Thanks, Leticia! It was a great time!

Way to go, ladies! I only wish Michigan wasn't so FAR from you all. Would love to have been there, too!

Next time you're near Detroit, I'm buying!

follow me on Twitter
Prayer to Obtain Graces by God’s Servant’s Intercession
God, who created man in your image and intended him to share your glory,
We thank you for having granted to your Church the gift of professor Jerome Lejeune, a distinguished servant of life. He knew how to place his immense intelligence and deep faith at the service of the defense of human life, especially unborn life, always seeking to treat and to cure. A passionate witness to truth and charity, he knew how to reconcile faith and reason in the sight of today’s world.
By his intercession, and according to your will, we ask you to grant us the graces we implore, hoping that he will soon become one of your saints.
Amen.