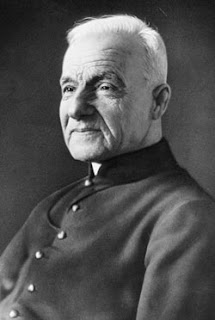 Today's saint, St Andre Bessett, lived a couple of towns away from me in the mill town of Mossup CT for a while before he entered religious life. He was frail and moved from job to job as they kept firing him. They considered him a loser, but he built St Joseph's Oratory in Montreal. He didn't have anything to begin with but a dream and a devotion to St Joseph.
Catholic Online says;


Despite financial troubles, Brother Andre never lost faith or devotion. He had started to build a basilicaon the mountain but the Depression had interfered. At ninety-years old he told his co-workers to place a statue of St. Joseph in the unfinished, unroofed basilica. He was so ill he had to be carried up the mountain to see the statue in its new home. Brother Andre died soon after on January 6, and didn't live to see the work on the basilica completed. But in Brother Andre's mind it never would be completed because he always saw more ways to express his devotion and to heal others. As long as he lived, theman who had trouble keeping work for himself, would never have stopped working for God.

His prayers worked thousands of cures for those who came to him in Montreal, however, for us in CT, especially the French Canadian community, he's our hometown saint!
May we like St Andre never let our weakness keep us from doing whatever God is calling us to do for Him.
Read more about St Andre at Catholic Online.