When Dr Jerome Lejeune discoverd trisomy 21 in 1959, the cause of Down syndrome, he intended to focus research in how to prevent the third copy of chromosome 21 from causing the congenital defects associated with Down syndrome. Tragically, the science was hijacked by an an effort to 'prevent' birth defects, in which researchers paired the karotype of trisomy 21 with emerging technology of amniocentesis, and the first prenatal test came into being.
Shortly thereafter, the first abortions of a babies with Down syndrome took place in the early 1960's while abortion was still illegal in many states.As it is today, these tests were billed as 'lifesaving interventions' when they led to the death of thousands of babies with Down syndrome. It seemed that science did not count those lost lives in calculating the value of prenatal testing.
This horrified Dr Lejeune, who intented to improve the situation of the person with Down syndrome who at the time were consigned to lives lived out in dreary institutions where they were not educated, but merely warehoused.  He envisioned a similar supplement taken during pregnancy to mitigate the effects of Down syndrome on the developing baby.It was the same Dr Lejeune who helped bring attention to the efficacy of folic acid in preventing neural tube defects when taken in pregnancy, so he had every right to expect this.

Instead the 'cure' was to kill the child through eugenic abortion, abortion done to certain babies because of their genetic diversity. And in its early days, this was touted as 'lifesaving' since previously, women were counselled to abort if they were close to forty simply based on statistics saying that their chances of giving birth to a child with Down syndrome was elevated (around age 40 the chances are around 1%, hardly high risk). 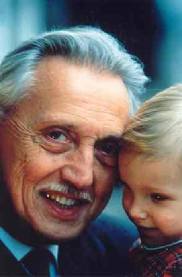 This begs the question;
What kind of medical intervention kills rather than cures the patient?


Dr Lejeune said, "Again and again we see this absolute misconception of trying to defeat a disease by eliminating the patient! It's ridiculous to stand beside a patient and solemnly say, 'Who is this upstart who refused to be cured? How dare he resist our art" Let's get rid of him!' Medicine becomes mad science when it attacks the patient instead of fighting the disease. We must always be on the patients side, always."


No attention was given to helping mitigate the effects of Down syndrome in living children. It as considered impossible, and frankly, not worth the effort. Parents like me who chose to carry our babies with Down syndrome to term were told that the only 'solution' was prenatal search-and-destroy. The Final Solution. There was virtually no research being done in Down syndrome. Dr Lejeune was one of few researchers who was seeking a cure. He said, "I see only one way left to save them, and that is to cure them. The task is tremendous, but so is hope."

Now science has taken a different tack, thanks in part to parent advocacy and leaders like Dr Brian Skotko Pediatrician at Massachusetts General Hospital Down Syndrome Program, bioethicist Mark Leach,   Rep Cathy McMorris Rodgers, founder of the Congressional Down Syndrome Caucus, Down Syndrome Research and Treatment Foundation, and the Jerome Lejeune Foundation which supported the research I note below, and my own KIDS Keep Infants with Down Syndrome.


Without their insistence that our kids deserve better than, immense and hopeful progress has been made. Now clinical trials of a new substance RG1662 in Roche Labs is showing great promise to improve the lifestyles of people living with Down syndrome. The National Catholic Register reports;


A cautious Roche spokesman, neuroscientist Dr. Luca Santarelli, said in a statement, “Our drug may offer a novel therapeutic avenue to treat the cognitive deficits in people with Down syndrome, enhance their communications skills and ultimately help them have greater independence in their daily lives.”

For the first time since Dr Lejeune's discovery in 1959 there is major scientific effort invested in saving the lives of those with Down syndrome, and maybe someday, when a woman faces a prenatal test which tells her that her child has an extra chromosome, she will have a positive response based on  hope for scientific discoveries like these,  rather than a fearful one based on outdated stereotypes.

This was a very well written post and words from dr. Lejeune that makes us reflect. Tks for sharing