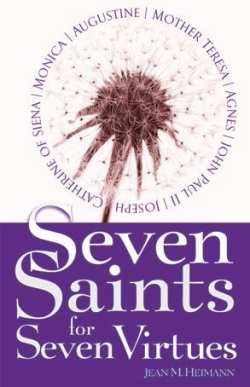 Jean Heimann, the author of Seven Saints for Seven Virtues had a wonderful Catholic mother. She modeled charity in action; she baked goodies for neighbors, nursed her sick and cranky father in his final days and was a model of charity for her daughter. also grew up with the venerable old volume Lives of the Saints which in archaic diction and fascinating details, told fantastic stories of the heroic virtue of the saints. I wonder, if as a child, Jean thought, "saints are models of charity, so is my mother, therefore, she might be a saint". I know I didn't  think that way about holy people whom I came across in my childhood; for me, saints were far off, ethereal beings who never even considered sinning. I think many Catholics were under that misapprehension, thanks to over zealous authors of saints' biographies and lack of role models in today's darkening world.

That's why this book is so important to Catholic spirituality. By describing how central growth in virtue is to attaining holiness, and by practically defining the seven virtues as well as the seven deadly sins, Jean Heimann gently reminds Catholics that holiness is not for a few lofty individuals, its for everyone. Charles Péguy once said "the greatest tragedy in life is not to be a saint." No one ever grew in holiness by comparing himself to the world.  Seven Saints for Seven Virtues gives us vivid examples of who Catholics should emulate, paired with their best known virtue. It offers the reader a road map for growth in the virtues which leads to holiness.

Seven Saints for Seven Virtues offers brief biographies of the saints,  filled with vivid descriptions of the lives of contemporary saints St. John Paul, Bl. Mother Teresa,  perpetual favorites, St Joseph, St Catherine of Sienna,St Agnes,  and the dynamic duo of mother and son;  St Monica and St Augustine. Despite her Master's Degree in Theology, Mrs Heimann's explanations of why those saints exemplify a particular virtue are easy to understand for laypeople. Her faithful writing at "Catholic Fire", an award wining Catholic blog, has given her the ability to reach her audience, making the seven virtues seem attainable and attractive. By showing how virtue leads to union with Christ, and interior peace, she makes the reader long to practice virtue more in their own life.

But there's more. Just as her mother was a role model in her life, perhaps without her family's acknowledgement of her outstanding virtue, Mrs Heimann knows that many of us live among ordinary people whose lives exemplify a particular virtue. Six other people are held up as role models of virtue. One is Olympic skiier Rebecca Dussault, whose pure relationship with her childhood sweetheart Sharbel,  grew to a chaste and fruitful marriage. A 32 year old mother of four children, Dussault is a model of modesty to her teammates, refusing to wear immodest clothing, be unfaithful to her beloved Sharbel, or be exposed to pornography. She was mocked by her teammates, but it never affected her resolve to live chastely as a married woman, athlete, mother and home educator. Sometimes her career as a skiier took a back seat to her convictions, "I also needed t be clear with my U. S. Ski Team coaches, letting them know that my husband and I practice NFP and that if I were to conceive--not that my chances were any better than any other woman contracepting on my team--we would yield to life unquestionably.I had many opportunities to share to share our use of NFP with others in light of marital chastity, trusting it even when the commitment to the Team was of Olympic proportions."

Mrs Heimann, a long time blogger friend of mine, saw the quality of diligence in my life (my family are still scratching their heads at this!) and included me in the chapter on the virtue of diligence with my great inspiration St. John Paul the Great. When I studied his encyclical "The Gospel of Life" I was given hope in the idea that even I, a home educating mother and part time writer, could become part of the New Springtime of Evangelization.  Seven Saints for Seven Virtues continues what St John Paul did in his pontificate, calling laypeople to evangelize where they are by leading heroic lives of virtue, attracting others to the light of Christ.

Thank you, Leticia, for this spectacular review! Thanks also for your graciousness in hosting the blog tour today.