Here's an optimistic,  lighthearted interview with a man whose been through many a battle and survived to hope that all mainstream faiths, even the Catholic Church, are moving towards orthodoxy and renewal. 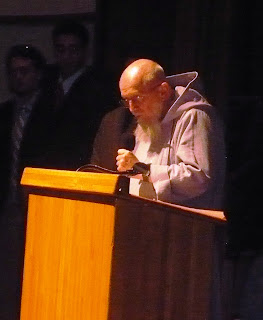 Celeste Behe asks: " What do you believe has been the impetus behind this renewal?

Fr Benedict responds:
"You cannot say; you can only blame the Holy Spirit. I have to tell you that the more traditional people did not win the battle; it was a standoff, but things nonetheless started to change. You find in this country that the mainstream Protestant churches are dying off; nobody goes to them. It’s the evangelical Protestant churches that are doing well. Also, many young Jews who had no actual religious training are becoming orthodox Jews. And even among young Catholics who are not particularly observant, there is at least an interest in the faith. God himself, through the Holy Spirit, is calling to souls, and I’m absolutely delighted with the changes that are taking place. The pendulum has swung."

Deo Gratias, for Fr Benedict's long and illustrious career, and for the pendulum's swing!