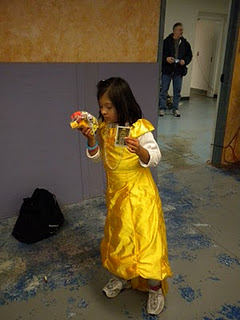 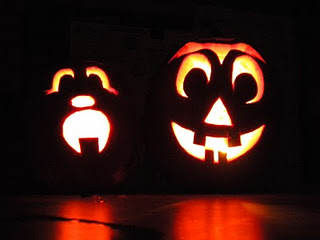 As a Catholic I find Halloween, at least the way I celebrate it, with a Vigil Mass for the Feast of All Saints, and with my children dressed in costumes depicting saints, to be a very Christian celebration of the Resurrection of the Dead and the Body of Christ, the Church.
Also in the Catholic version of the Scriptures we have the book of Maccabees which affirms the Catholic practice of praying for the souls of the dead who are suffering in Purgatory. All Saints Day and the followig Feast of All Souls Day are focused on remembering that our goal is Heaven, and we have to pray for those who have gone before us to reach their Heavenly Home. We celebrate that fact by dressing as our heroes the saints who have gone to their reward in a blaze of glory. Saints are Catholic superheroes.
In these photos, Christina is dressed as St Margaret of Scotland, a queen who brought a Christian civilizing influence to her Scottish husband, King Malcolm's court, and who was known for her charity. 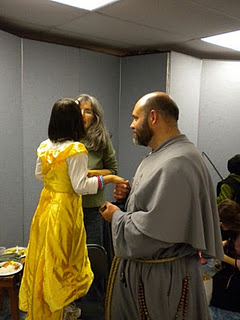 "II Maccabees 12:43-46:
"And making a gathering, he [Judas] sent twelve thousand drachms of silver to Jerusalem for sacrifice to be offered for the sins of the dead, thinking well and religiously concerning the resurrection, (For if he had not hoped that they that were slain should rise again, it would have seemed superfluous and vain to pray for the dead,) And because he considered that they who had fallen asleep with godliness, had great grace laid up for them. It is therefore a holy and wholesome thought to pray for the dead, that they may be loosed from sins."
Here's a montage of our celebration of All Hallow's Eve.

Our parish is holding an All Hallows party for local primary school children. Last year was a huge success and we're hoping for the same thing this afternoon. I know some people don't like even the Christian themed parties but I think they're invaluable as they get kids thinking and learning about the saints, realising how God has worked through them and where, as you rightly said, their sights should be set; heaven. I hope you have as much fun as we will!