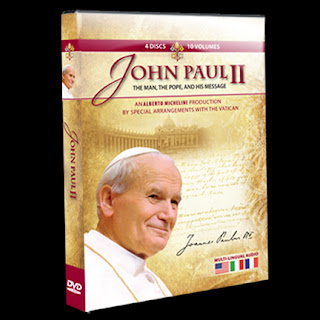 Review of John Paul II; The Man, The Pope, and His Message
By Alberto Michelini
Leticia Velasquez
Catholic Media Review.
Volume 8 I Am Your Voice: The Pope on Human Rights
Catholics have long enjoyed the work of papal videographer, Alberto Michelini. Now under a special arrangement with the , what was formerly available on video has been converted to a four DVD set containing five hours of dramatic documentary footage, organized by topic into ten 30 minute films. Each film focuses on a different aspect of the pontificate of Blessed John Paul; including youth, children, the poor, the family, Marian devotion, historic events, a day in the papal apartments, and the working world. The series is available in English, French, and Spanish.  The companion website wwwjohpaulseries.com for this DVD set has free downloads of companion discussion guides for leaders and participants for each volume with tools for group discussion. This makes this series an ideal tool for teachers to use in Catholic school, CCD, and parish adult ed programs. Study groups could use these films in private homes. Homeschooling mothers from the JPII Generation will find this ideal for teaching their children about the legacy of Blessed John Paul.
Volume 8 “I Am Your Voice” is the powerful film on human rights; Pope John Paul is seen interacting with and addressing poor, sick and persecuted people from every corner of the globe.  A heartbreaking cry of misery is documented in this film; from the slums of Latin America and , the prairies of , the plazas of , the Australian Outback, the savannahs of Africa, and the shipyards of . The desperation of the members of the human family who are callously denied basic human dignity are heard by the man who himself suffered under two oppressive regimes.  South Americans who are living forsaken in squalid slums while neighbors enjoy luxury, occupying land was stolen from them. African lepers whom the government has forgotten, living in filth, workers who are deprived of just wages and political freedom, aboriginal tribes whose numbers are decimated yet remain proud of their culture. The Pope listens to their pleas with love and tells them “The Church hears your voice”
He responds to such pain with tears of compassion, embracing the disconsolate and dying, and railing with righteous indignation at the perpetrators of injustice at the rich who ignore the hunger of the poor, and the violence between protesters and police in while he shouts to the multitude, “Love is stronger, Love is stronger!” John Paul speaks unflinchingly in defense of human rights at the United Nations in 1979, attempting to awaken the powerful of the world from the somnolence of egotism. He prays with profound sorrow at the grave of murdered Polish priest and Solidarity activist Fr Jerzy Popieluszko. Not taking sides for political purposes, as he is often accused of doing, the Pope is consistently on the side of the downtrodden, pointing out that the Church cannot be silent when human dignity is at stake.
During this moving footage, the narrator adds context to the scenes, and quotes from John Paul’s numerous encyclicals dealing with social justice; allowing viewers to grow in understanding of the Church’s position on human rights issues, as a preferential option for the poor,  while avoiding the errors of Liberation Theology. He says that Christ came that we might have life abundantly, yet does not favor one political solution over another, rather, he attempts to stir the consciences of those in charge of the world’s economic systems, both left and right. For this he receives criticism for “dabbling in politics”.
Today there are protests of increasing intensity around the world, expressing frustration with injustices both political and economic. The Holy Father addressed this in his speech at the United Nations in 1979 when he said, “wars develop when inalienable rights are violated.” His warning was fulfilling the prophetic duty of the Church, to be the voice of the oppressed. He exclaims “the Church cannot be silent when human dignity is at stake”. One of the most emotionally charged moments of this documentary is when John Paul II upbraids his fellow Poles in 1991 in Kielce when he reminds them, shortly after the Solidarity Movement brought freedom to those behind the Iron Curtain and there  was a movement to tell the Church to get out of politics with regard to abortion. He reminded his countrymen that a child is a gift from God. 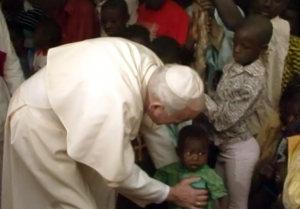 No human being is forgotten in John Paul’s passionate defense of the dignity of mankind from birth to natural death. These films are compellingly narrated using the best of John Paul II’s encyclicals to educate the public about why Pope John Paul is called the Great and why millions attended his funeral shouting “Santo Subito!”
Don’t miss this outstanding series which offers an unparalleled opportunity to relive this extraordinary pontificate, and grow in your appreciation of the historical legacy of soon to be St John Paul.
In the spirit of the Gospel as well as out selfless Pope, It is “better to give than to receive”, CCC of AMERICA is hosting a contest: JPII They Love You. People who go to the Pope Series website to complete a brief web form in order to enter someone of their choosing to win a DVD set (valued at $49.99). They will have only 50 words or less to say why they are entering that particular friend, relative, neighbor, CCD teacher, Priest, etc to win a copy of the series.
More information may be found at this website; wwwjohpaulseries.com