On September 11, the DVD of "For Greater Glory" will be available. In  preparation for this event, I interviewed actor Eduardo Verastegui by phone. I reminded him of this interview which I conducted with other members of the press here in Connecticut in August 2009 and he fondly remembered staying as the guest of the Sisters of Charity in Baltic, CT. I will be linking to the interview here when I type it up.
We discussed the film, and passing on the Faith to children, and the dangers of our children losing it when they leave home. I wanted to tell him I am not worried about my daughter losing her faith because of who she is, and where she is going to university, but we had time constraints and I didn't have a chance.
Here is the interesting part. My daughter Gabbi met Eduardo in 2009 when I did,  both at her summer camp with the Sisters and after my interview with him. Here they are in these photos.

Now I interview him again, and, afterwards,  I called her to tell her, she is away at Franciscan University of Steubenville, and she tells me that she will be meeting Eduardo again, on Monday as he screens "For Greater Glory" there.
I hope she'll get a chance to tell him she's my daughter, and that I don't have to worry about her losing her faith at Franciscan. She's in great hands at Franciscan. 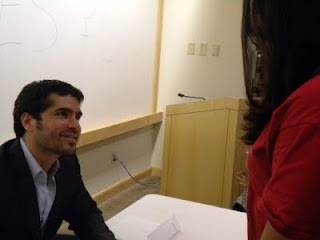