from Business Week;
Shares of Sequenom Inc. surged Friday after the company said demand for its maternal Down syndrome test is improving and it expects to surpass its previous guidance for testing volume.
Sequenom said at the end of October it was handling about 1,700 MaterniT21 Plus samples a week, which projects to a rate of about 90,000 tests per year. The company said it ran about 18,000 of the tests during the third quarter and will "significantly exceed" its estimate of 50,000 billed tests in 2012.Read the entire article here.

Here is my response.

Not that pre-natal testing is wrong in itself, but with the extraordinarily high (75-92%) abortion rate when these tests yield a positive result for Down syndrome, does't Sequenom plan on investing any of these profits into education about the research advances made this year testing the first medicines to treat the cognitive delays present with Down syndrome?

To inform the parents of the amazing things people with Down syndrome are able to do today, complete high school, act, compete in sports, hold down a job, get married, paint, play instruments or simply spread their unique joy in life?There has never been a better time to be born with Down syndrome. 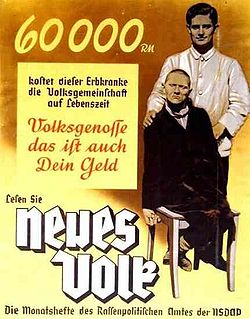 Or do the owners of this company see it as their goal to rid the world of those with extra chromosomes?
See the poster below from Nazi Germany stating that the developmentally delayed are "useless eaters" who cost the people much needed funds without offering anything to society.

Dr Jerome Lejeune who first discovered the cause of trisomy 21 and made Materni T21 possible won the Kennedy Prize for this discovery 50 years ago, and dedicated his entire life to finding treatments to improve the lives of those with extra chromosomes, I hope that Sequenom takes the same type of socially responsible attitude instead of just making their investors rich.