The Fear Which Haunts Me 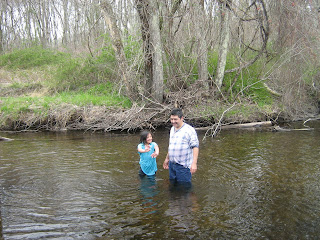 There have been great changes in my household in the past year. Four older teenagers have moved out of my home to begin their independent lives; my brother and sister-in-law, a friend's daughter who was boarding with us, and my oldest daughter Gabbi is attending Franciscan University of Steubenville.
That leaves me alone with Christina, now ten years old, at least five hours a day. Most of the time we enjoy one another's company and happily work together, eat together, and just enjoy a walk, a movie or board game together. But sometimes I have to put in a load of wash or get involved in yard work, look up and Christina is gone. The house is eerily silent, and she does not answer my panicked calls. It last happened on Sunday, in the dark, and she was found in the car in the driveway, waiting to go pick up Bella from youth group. Most times it is something normal which any other ten year old could do without freaking me out. But Christina is NOT a normal ten year old and stories like this terrify me.


Jenny was a special needs student with Down syndrome. Sheslipped out of her physical education class that day, and sadly after an exhaustive search, her body was found in a nearby retention pond several hours later.

This happened despite five aides who were present and a gym full of children, many of whom saw Jenny leave and assumed it was OK. It wasn't OK. Children with Down syndrome are always children, and have to be watched with extra vigilance.
We have a shallow river nearby, and a pool in our yard. We have little traffic on our road, but they drive too fast, and it only takes one car, and we have woods, endless woods where she can get lost or find a predator.
Animal or human. We have bears, bobcats and coyotes.
I have put up a tall fence around my home, thanks to funding from the State,  and am looking into alarms for the doors, as Christina has learned how to open them. We need more secure locks, and I would love more pairs of eyes to help me keep track of her. I never want to live with the regret that Christina found herself in harm's way and I could have prevented it.
I pray to her Guardian Angel and seek peace that I am as vigilant as humanly possible. The rest is in God's hands.

I live in a similar situation with a 200 acre resevoir and miles of wooded area right out our front and back doors. Our son has learned how to unlock both dead bolt and push and twist locks. We put spinning door knob covers over all our outside doors and pantry door. So far Joseph is staying put. They are so hard to get out of that I actually have a slight fear of not being able to get out in case of an emergency. But I think that risk is significantly less than the emergency of Joseph getting outside unattended. I pray every day for families with wandering children that their Guardian Angels will always be vigilant in their protection.

In case you are not sure of what I'm talking about. The doorknob covers can be purchased at any bigbox discount store and even online at the Safety First store. They are located in the child safety proofing area near the infant clothes and diapers.