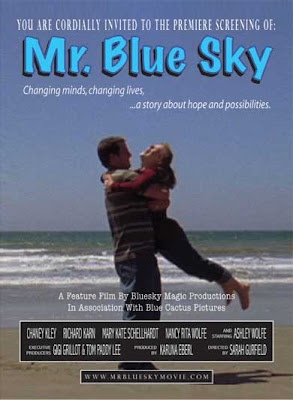 Sometimes the girl next door holds the keys to your happiness. Three neighbors, Andra, Bonnie and Greg, grow up across the street from one another. When tragedy strikes, causing Greg's mother to lose hope and take her own life, Andra sends him a drawing of "Mr Blue Sky", as she calls the sky to console him. Her mother has told her that he is present even when the clouds block him out, and he will come out again someday. When Andra is mocked and bullied at school, because she has Down Syndrome, Bonnie and Greg come to her aid, and they form a close bond. Andra's mother fears for her daughter's future; her father had abandoned them at birth, and so many of her classmates reject her calling her stupid, only Greg and Bonnie stand by her, so they become known as the three soulmates. The girls vow to be 'friends forever'.Fifteen years later,we see Bonnie as a successful lawyer, dating Greg now an elementary school teacher, where they all attended school. Andra attends community college, and her mother approaches Greg for tutoring help for Andra as she nears graduation.
Something in Andra's kindness to him as a child, and her sunny optimism gives Greg pause, making him look beyond his shallow relationship with Bonnie, and his father's deep alcoholic depression since his mother's death. Could it be love? Does Greg dare to defy social convention and listen to his heart?
Emotional impact is key in this story of friendship ripening into love, and rich performances by Ashley Wolfe and Chaney Kley win over the skeptics about this heretofore unheard of relationship. What was once unthinkable; a love relationship between a woman with Down Syndrome and a 'normal' man, captures your heart, challenging old stereotypes. This film was fresh and engaging, with stirring performances by Chaney Kley and Ashley Wolfe, who in her first movie shows promising talent. Richard Karn of "Home Improvement" is Greg's dad, and Ken Rosier is Mr Hounsou, the school principal.
This movie is being shown at the Babylon, Long Island Cinema for a week-long limited release until November 15.
Posted by Leticia at 10:27 PM

Oh this sounds good... hope it comes to a local theater! Thanks for the spotlight on it.

I want to know... how did you post in the future?

The date is automatically placed on your post, however, if you want something to remain in the 'headline'of your blog, you date it intentionally in the future. That way, your other posts will fall under it. I am trying to help my friend Tom Lee who produced "Mr Blue Sky" have a good week in the theatre, and get distribution of this wonderful film. He was interviewed by Jim Watkins on Channel 11 news last Saturday night. Did you see him?

What a great idea! No, I missed him on TV.. we were probably already in bed! This sounds like a great movie.