Have you lost an unborn child? 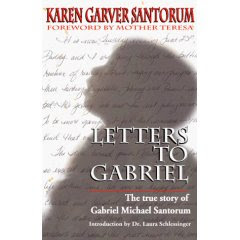 I have lost three children to early miscarriage, on St. Patrick's Day, Good Friday, and St. Padre Pio's Day. Why do I know the dates? Because these children will always remain part of me until I can see them in heaven.
If you have had difficulty finding books to read while mourning your little ones, you might find comfort in Karen Garver Santorum's book, "Letters to Gabriel". In it, she published her actual journal entries during her pregnancy with her son Gabriel, whom she lost due to an infection caused by inter uterine surgery to save him from a fatal anomaly. The extraordinary lengths which Karen and her husband Senator Rick Santorum went through to save Gabriel's life while the Senator was defending the Partial-Birth Abortion ban, is truly poignant. The babies killed by this gruesome procedure, were the same gestational age as the Santorum's son, who was fighting to live. Once, during a particularly tense moment of Senator Santorum's speech, the cry of a baby pierced the silence of the Senate chamber. Senator Santorum felt it was the voice of Gabriel, pleading for innocent lives.
Gabriel's brief life was full of love from his family, and his legacy, which we now see, is the uplifting of the dignity of all human life, and the eventual decision by the Supreme Court to uphold the Partial-birth abortion ban.
Thank you, Senator and Mrs. Santorum, for allowing us a look into this most painful episode of your private life, in order to give us a glimpse of true courage in suffering.
Posted by Leticia at 2:33 AM