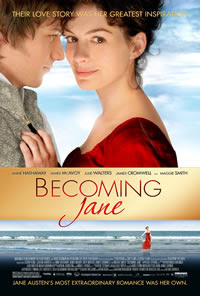 Whenever a film about a famous author comes with a trailer which threatens to shatter my English-major respect for a literary great, I tend to avoid seeing a film, for fear of being disillusioned by a "Hollywood job" on one of my favorite authors. For generations, knowledge of Jane Austen's novels have been the hallmark of a good education in English Literature. The trailer's image of a bad-boy running after lady-like Jane Austen, turning her ordered world upside-down, to be honest, did not look promising, nor did the sight of her respectable minister father, getting frisky with his wife, while the opening credits were rolling, did nothing to ignite my enthusiasm for Becoming Jane. What did spark my interest, however, was the first sight of Jane herself, up before dawn, scratching away at her writing in a tattered nightgown, unkempt hair, and ink-stained fingers. Her sudden burst of inspiration with which she wakes her family with her enthusiastic piano playing, and their resultant groaning, 'there she goes again, get that girl a husband'! That woman, I can relate to. It is sunrise here in my home, and my fingers ply the keyboard rather than the inkwell, nevertheless, the emotional connection is there. Writers are most alive when they are pouring themselves into their work, oblivious to their surroundings. This can make them a bit odd, as Jane was, but it can also be a source of great pride for their family. The sight of Anne Hathaway the family poet, reading her tribute to her sister on her betrothal, only to me mortally wounded by Mr. Lefoy's (played by James McEvoy), dismissive comments, touched the heart of this writer, and made me anxious to see how she could possibly become romantic with this lout! And what about this brawling, boozing, womanizing, slacker could possibly inspire a lady like Jane?
Rapturous music, dreamlike shots of the countryside, delightful acting by Julie Walters as Mrs. Austen, and natural lighting coupled with well delivered 19th century dialogue make this unlikely film more believable, though James McEvoy's accent was disappointingly English for a Limerick lad. I found myself, as I do in her novels, and their recent screen adaptations, hoping that the unlikely couple would make a go of it, and save Jane from the wealthy dolt her mother fancied for her, a plot so familiar from Pride and Prejudice, and Sense and Sensibility. Jane's characters are woven into the film, and I enjoyed watching her write about Mr. Darcy and refer to herself as a matchmaker like Emma.
I do recommend this film for Jane Austen fans who are not strict purists, but, due to some brief nudity at the swimming hole, and inappropriate though off-camera bedroom antics of a married couple, so I advise leaving the children at home. This is a girlfriend movie, so leave time for a cappuccino afterward.
Posted by Leticia at 6:51 AM

What a wonderful review! I can understand your reluctance to view the film - and your pleasant surprise at its competence. I will definitely put this on my list of must-sees. If you happen to view the film about Beatrix Potter, I would love to see you review it (if you would recommend it).