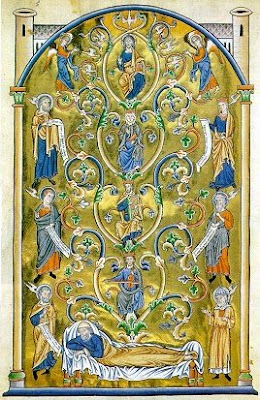 Jesse was the father of the great King David of the Old Testament. He is the first person mentioned in St. Matthew’s gospel outlining the genealogy of Jesus. In Church art a design developed showing the relationship of Jesus with Jesse and other biblical personages. This design showed a branched tree growing from a reclining figure of Jesse. The various branches had pictures of other Old and New Testament figures who were ancestors of Jesus. At the top of the tree were figures of Mary and Jesus. This design was used mostly in stained glass windows in some of the great medieval cathedrals of Europe. The Cathedral of Chartres (which was dedicated in 1260) has a particularly beautiful Jesse Tree window. Another development in religious art during the Middle Ages was that of Mystery Plays--drama that depicted various Bible stories or lives of Saints and Martyrs. These plays were performed in churches as part of the liturgical celebrations. One such play was based on the Bible account of the fall of Adam and Eve. The "Tree of Life" used during the play was decorated with apples. Quite possibly this is also the forerunner of our own Christmas tree.
Perhaps inspired by the stained glass Jesse Tree window and the Tree of Life from early Mystery Plays, the Jesse Tree is known to have been in use in Catholic homes during Advent since at least the 1950’s to help families prepare for Christmas by truly celebrating the meaning of Advent. This information is from www.CatholicCulture.org
To make a Jesse Tree, a bare branch (as opposed to the evergreen Christmas tree) is placed in a flowerpot inside the home, and each day, an ornament is added which represents a different prophecy or ancestor of Christ. The appropriate Scripture verse is read and the family prays a short prayer. The first symbol is Creation, then the apple of Adam and Eve, and the last is the Baby Jesus, and in-between Noah’s Ark, the blood on the doors at Passover, the Ten Commandments, Joseph’s coat of many colors, the Cross, the Virgin Mary, and St. Joseph, among dozens of others.
Last Monday, the second day of Advent 2007, in Melville, NY, fifteen Long Island families gathered to share in this ancient tradition. They were organized online via a Yahoo group called IHM (Immaculate Heart of Mary) which is a group of Catholic women on Long Island, most of whom homeschool their children. Leticia Velasquez, the homeschooling mother of three girls, had been inspired by a recent magazine article in “Faith and Family” magazine entitled, “A Jesse Tree for the Rest of Us” (Nov/Dec 2007) to organize the party. The article described the author’s frustration trying to keep this tradition with her own family using the lackluster pre-made ornaments which are available. She outlined a plan for families to organize a Jesse Tree ornament swap, where each family would make enough copies of an ornament, for each family to bring one of each home. At the party, each family would pick up one of each of the 24 ornament types, much like a Christmas cookie swap. Since Advent varies in length each year, there may be any number of ornaments available for any given day, and the goal is to build up your collection year to year, eventually incorporating all of the “family” and/or prophecies. One place to start might be the free downloadable resource available from the magazine’s website at NCRegister.com under “Resources”.

To enrich the experience of the Jesse Tree swap, Leticia invited Mrs. Patricia Bissex and Miss Lynn Wilson, authors of the “Catholic Family Living” series of books on the history of feast days in the Catholic Church with practical suggestions on how to live them with your family. Mrs. Bissex, a Massachusetts native, has homeschooled her all of her 7 children, and her books are replete with the practical lessons she developed for her family to “keep” the Advent season. For instance, since in this first week of Advent, Catholics celebrate the feast of St. Nicholas, Mrs. Bissex outlined age-appropriate ways in which an older child could do a report on the saint’s life, while a younger child could do various art projects representing the popular saint, keeping the entire family on a theme and really living Advent to the fullest. Mrs. Bissex explained that Christmas was actually forbidden in Great Britain after the Reformation, and this ban extended on to many of the American colonies. By the Victorian era, however, German-born Prince Albert, the husband of Queen Victoria, brought his native custom of the Christmas tree to England and Christmas celebrations experienced a revival. For more of her ideas and inspirations, please see the bibliographic note at the end of this article.

Miss Wilson, who is a lifelong teacher and catechist, worked with the children to make several simple crafts while the parents were free to enjoy the presentation. Among the symbolic “hand-works” created that afternoon was a simple tissue paper and pipe-cleaner red rose representing the Blessed Mother whose Immaculate Conception we celebrate in Advent, and a simple stained glass window image of a candle printed on transparency film to decorate and display in the home as a light to welcome the Child Jesus, as well as a clay stump-and-leaf representing the root of Jesse prophesied in Isaiah 11:1 “1 But a shoot shall sprout from the stump of Jesse, and from his roots a bud shall blossom.

The excitement mounted when the ornament exchange took place, and the creativity and beauty of the ornaments, made with the help of the children, were truly extraordinary. No two families’ styles were alike, and the Jesse Trees which will emerge from this gathering will teach the children of these families how to anticipate Jesus in the days of Advent, while meeting many of His ancestors in the reading of the Old Testament passages they represent. Little hands which fashioned the ornaments will take extra pride in placing them on the Jesse Tree as their anticipation of the birth of Jesus builds day after day this Advent. See the slideshow of the event here.
“The Catholic Family Living Series” books may be purchased by contacting Miss Wilson at lynnmaryw@aol.com, or by sending a check for $25.00 made payable to Patricia Bissex, to Lynn M. Wilson, P. O. Box 432, Huntington Station, NY 11746.
Posted by Leticia at 3:19 PM

follow me on Twitter
Prayer to Obtain Graces by God’s Servant’s Intercession
God, who created man in your image and intended him to share your glory,
We thank you for having granted to your Church the gift of professor Jerome Lejeune, a distinguished servant of life. He knew how to place his immense intelligence and deep faith at the service of the defense of human life, especially unborn life, always seeking to treat and to cure. A passionate witness to truth and charity, he knew how to reconcile faith and reason in the sight of today’s world.
By his intercession, and according to your will, we ask you to grant us the graces we implore, hoping that he will soon become one of your saints.
Amen.