In Flanders Fields
By: Lieutenant Colonel John McCrae, MD
(1872-1918) Canadian Army
In Flanders Fields the poppies blow
Between the crosses row on row,
That mark our place; and in the sky
The larks, still bravely singing, fly
Scarce heard amid the guns below.
We are the Dead. Short days ago
We lived, felt dawn, saw sunset glow,
Loved and were loved,
and now we lie In Flanders fields.
Take up our quarrel with the foe:
To you from failing hands we throw
The torch; be yours to hold it high.
If ye break faith with us who die
We shall not sleep,
though poppies grow
In Flande 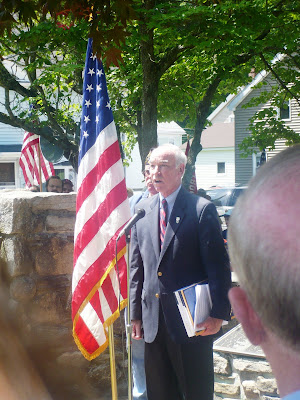 rs fields.
On a positively luminous spring afternoon, the tiny parade in Sprauge wound it's way through the old factory town by the river, while I watched under shady tree near the Veteran's Memorial. It was gratifying to see so many of my new friends in the parade, Christina's friend Tommy(with T21) with the cub scouts,Gabbi's, and Bella's friends on the sidelines, and my pastor, Fr Tito to give the invocation. In only 9 months, we have become part of this tight knit community of faithful Catholics, and Connecticut feels like home.
Here are two of the politicians who spoke at the ceremony:
Connecticut Congressman Joe Courtney, a Democrat, has a 05 pro-life voting record. His speech received moderate applause at the Sprauge Memorial Day service. Fr Tito, my pastor, who read Alex De Touqueville's quote, "America is great, because America is good, when American ceases to be good, it will no longer be great", received much stronger applause. We are in the conservative area of a liberal state. 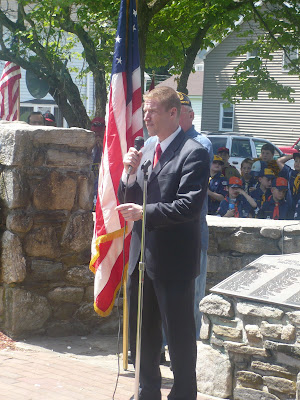 Connecticut State Represenative Chris Coutu (R dist 47)on the other hand is a Catholic and votes like one. I met him one Saturday in September during his campaign, and he assured me he would think about voting like a Catholic. His HS teacher, Paul Tetrault, whom I met at the polling place, where he held pro-life signs, assured me that he would, or Chris would have to answer to him. He has a distinguished record of military and community service including volunteering in the Special Olympics(unlike our President who only uses it as the butt of jokes).
He voted against the terrible S899 bill legalizing gay marriage in Connecticut, and forcing homosexual agenda on the state's schoolchildren.
We salute you, veteran and proud Catholic in a cowardly Catholic state, Rep Chris Coutu!
Posted by Leticia at 9:37 AM