A Message from Mary Ellen Barrett 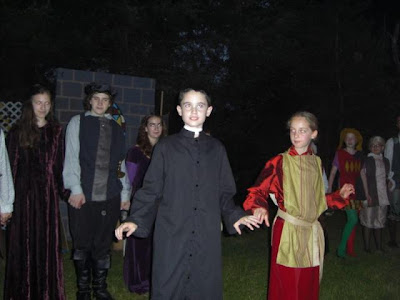 When a tragedy hits, sometimes the newspapers get it wrong. This happened when my friend, Mary Ellen Barrett's 14 year old autistic son Ryan was found dead at a family campout this Friday.
I have her permission to share her side of the story with you. Ryan will be buried in a Mass concelebrated with Mary Ellen's uncle Msgr Robert Brennan and the Franciscan Friars of the Renewal, whom Ryan had hoped to join this Wednesday.
Please keep the Barretts in your prayers.

"Ryan was a light in our lives and now that he is forever at the feetof Christ his light will shine even brighter for us.I know it’s been difficult for everyone, getting information piecemeal.
Here are some details, please feel free to share them or any part of this email.

Ryan was playing in a little stream a few yard from the campsite. His father and the others knew where he was and he was in view. Other kids were near him but after a bit they spread out. They were all very excited to be in the campsite, they had only just arrived. When theyc alled the kids for prayers Ryan didn’t come and after a very short time the rangers were called and then the state police and firemarshals.
They searched with dogs (my poor Ryan so terrified of them). Dave called me at 11:30pm and then every hour until our dear friend,who was scheduled to go up there Sat with his four boys, drove me upat 4:30am. I arrived there at about 8:00 and they were searching with a helicopter and infrared radar as well as divers. He was found atabout 10:30.
In the five minutes between the other kids being thereand his being called Ryan had a grand mal seizure and slipped into the stream, his body was found a few feet away in a drain in a culvert.
It is believed the seizure is what killed him although we don’t have confirmation of that yet. When Dave and I saw him, he looked very peaceful and that was of great comfort to us. Ryan received last rites at the campsite, two priests against all odds showed up in the middle of the woods at exactly the right time toadminister the sacrament. Only Ryan could have arranged that.
It was reported that Ryan wandered off and some reports were quite cruel in their tone. It just is not true. We did a brief interview with Newsday to try to correct that and have since had my brother dealing with turning away all of the news agencies. They have been like barbarians at the gate.
In the last 48 hours we have been so blessed by all of the prayers and love that we have received. My friend Chris has completely taken overand has made it possible for us to not have to think.
The Knights ofColumbus and Squires have also been incredible. I know all of the people on IHM and MO have been contacting Chris and lining up to help and we are just so grateful. The pain that David and I are in is too unbearable to speak about. I ask for your prayers for us and our children. Katie and Erin inparticular are old enough to understand and are completely devastated. Every time I look at them my heart breaks all over again. The little ones are sad and confused, not really understanding.
We are very mindful of how sad this is going to be for all of Ryan’ s friends in IHM. For many it will be there first experience with losinga friend and Dave and I are offering up some of our sorrow for their comfort. They have lost a dear friend but gained a mighty intercessor. In the coming weeks we will read all of the emails and posts and doour best to respond to everyone, in the meantime please be assured ofour gratitude and love for you all. "

How typical of Mary Ellen to offer up her sufferings for Ryan's friends! I hope to attend his funeral Wednesday.

Dearest Barrett family,
Please know that all of you are in my thoughts, and prayers, partcularly my daily rosary.
As a mom of four, I can't imagine the pain you're feeling. Please know that many, many people are holding you close in prayer and their hearts.
With my love and prayers,
Gail

This is so horrible. We will be praying for this family.

I am so sorry for your loss. We will be praying for you.