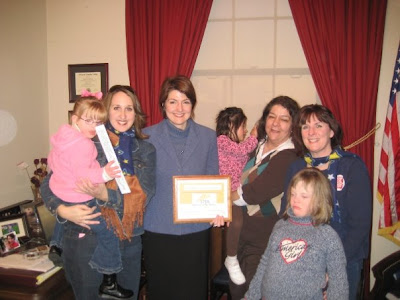 On April 27, 2009, I, along with the other members of the congressional Down syndrome caucus, wrote to the National Institutes of Health (NIH) expressing concern with the lack of funding for Down syndrome research. (You can read that letter here.)

In particular, we requested NIH triple its funding to Down syndrome research, especially in light of additional funding made available from the stimulus package. We felt NIH’s response to our letter was inadequate and requested an in-person meeting to discuss their commitment to Down syndrome.

As a result, a week ago today, Dr. Yvonne Maddox, Deputy Director, of the Eunice Kennedy Shriver National Institute of Child and Human Development (NICHD), briefed me and the other caucus co-chairs on NICHD’s funding priorities. I was extremely pleased to hear NICHD reaffirm its commitment to the short and long term goals set forth in the 2008 Research Plan on Down syndrome, particularly through NICHD’s commitment to future funding announcements for Down syndrome research over the next five years.
Equally exciting, as I mentioned above, was the long-awaited introduction of the Trisomy 21 Translational Research Parity Act of 2009, which I sponsored, together with Congressman Patrick Kennedy (D-RI) and Congressman Pete Sessions (R-TX). This bill is critical to ensuring Down syndrome research remains on par with the research infrastructure of other diseases.
In 2000, the Children’s Health Act amended the Public Health Services Act in a number of ways, including by authorizing research and surveillance for a number of conditions and disabilities such as juvenile diabetes, Fragile X, asthma, and epilepsy, autism, and traumatic brain injuries. However, the amendments did not authorize the research and surveillance of Down syndrome.
The Trisomy 21 Translational Research Parity Act of 2009, will bridge the critical gap that currently exists in Down syndrome research between basic medical research and cutting edge clinical trials. The bill will recognize at least six Centers of Excellence around the nation that will be dedicated to conducting translational research as well as create the much need biobank and registry to assist with the Down syndrome translational research program.
More than 400,000 individuals have been diagnosed with Down syndrome (also known as Trisomy 21). The extra chromosome causes varying degrees of intellectual disabilities as well as physical abnormalities. As a result, those with Down syndrome also have a number of other medical conditions, including: Alzheimer’s disease, autism, and other neurological and psychiatric disorders. I believe the funding opportunities confirmed by NICHD this week as well as the research infrastructure authorized by the Trisomy 21 Translational Research Parity Act of 2009 will not just benefit individuals with Down syndrome but the millions people with other conditions and diseases.
While we have a long way to go, I believe last week represented a turning point in our efforts. I look forward to continuing working with the disability community to ensure funding and infrastructure remains a priority here in Congress.
Bravo Representative McMorris Rogers!!!
She is the best friend the Down syndrome community has in Congress. She is pictured here with me, Eileen Haupt and other members of Keep Infants with Down Syndrome.
Now exciting research projects like those of Dr William Mobley of the Down Syndrome Research and Treatment Foundation can get the required funding they need to move forward. Maybe someday, there won't be a 90% abortion rate for children with Down syndrome, once we can give hope to parents from this promising research.