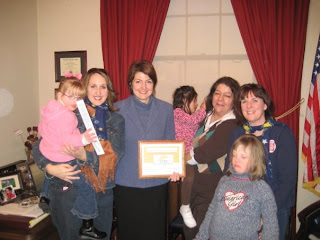 Here's a list of the great things Cathy McMorris Rogers did for people with Down syndrome in Washington DC from her email. What she doesn't mention is that she is passionately pro-life and also stood up for the rights of disabled and unborn people against Obamacare on Sept 15 with Healthcare for Gunner. You can view the video here.


As we close 2009, I wanted to share my observations of the past year. It has been an exciting twelve months for the disability community. We’ve witnessed a great deal of progress in a number of areas which I’ve highlighted below.
On February 26, Congressman Ander Crenshaw introduced H.R. 1205, the Achieving a Better Life Experience Act (ABLE Act). The ABLE Act is intended to give disabled individuals a savings instrument, just like existing savings accounts for college, retirement, and other normal life events. Anyone can contribute to an ABLE account and distributions can be used for education, medical and dental care, community-based support services, employment training and support, moving, and housing and transportation expenses. H.R. 1205 has 141 cosponsors, including members of both parties. Together with my colleagues, I am working to ensure its passage in 2010.

On September 23, I joined the other members of the Down Syndrome Caucus to meet with Dr. Yvonne Maddox, Deputy Director of the Eunice Kennedy Shriver National Institute of Child and Human Development (NICHD) to discuss NICHD’s funding priorities. I was extremely pleased to hear NICHD reaffirm its commitment to the short-term and long-term goals set forth in the 2008 Research Plan on Down Syndrome, particularly through NICHD’s commitment to future funding announcements for Down syndrome research over the next five years.

On September 25, I introduced the Trisomy 21 Translational Research Parity Act of 2009 with Congressman Patrick Kennedy (D-RI) and Congressman Pete Sessions (R-TX). In 2000, the Children’s Health Act amended the Public Health Services Act in a number of ways, including authorizing research and surveillance for a number of conditions and disabilities such as juvenile diabetes, Fragile X, asthma, epilepsy, autism, and traumatic brain injuries. However, the amendments did not authorize the research and surveillance of Down syndrome. The Trisomy 21 Translational Research Parity Act of 2009 will bridge the critical gap that currently exists in Down syndrome research between basic medical research and cutting-edge clinical trials. The bill will recognize at least six Centers of Excellence that will be dedicated to conducting translational research and create the much-needed bio-bank and registry to assist with the Down syndrome translational research program.

On December 13, I joined with Congressman George Miller, Chairman of the House Education and Labor Committee, to introduce H.R. 4247, the Preventing Harmful Restraint and Seclusion in Schools Act. There are already federal guidelines against the inappropriate use of seclusion and restraint against children in the Children’s Health Act but those have not been extended to schools. Last May, the General Accountability Office (GAO) highlighted the prevalence of seclusion and restraint in schools -- rather than employing techniques to diffuse the situation. The lack of guidance to school districts and teachers, GAO found, only exacerbated the situation. And, as I’ve looked into this, I’ve come to the conclusion that there is a lack of training; a difficult situation arises and a teacher or principal just doesn’t know what to do. The bill that I introduced with Chairman Miller gives states much-needed guidance so they can advise school districts on the best practices. In addition, the bill gives schools the resources they need to ensure that their personnel handle situations in the most positive manner possible. The bill has the bipartisan support of both parties and I’m confident of its passage in 2010.

While we still have a long way to go, for me personally, I believe this year represented a turning point in our efforts. I look forward to continuing to work with the disability community to ensure that funding and infrastructure remains a priority here in Congress.