Why I moved to Connecticut 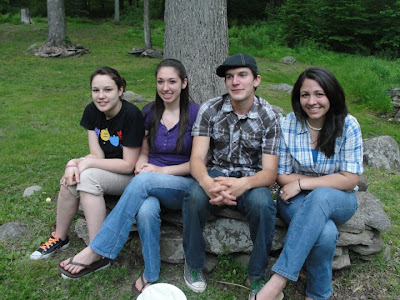 We had become isolated from like minded Catholics on Long Island, when my friends fled south en masse. We needed a Catholic community. Since September 2008, we have been living in Eastern CT, close to the Friary of Our Lady of Guadalupe in Griswold, attending Holy Mass at St Mary of the Immaculate Conception in Baltic, with the famlies of these wonderful wholesome Catholic teens  (See Derek in the 11 on my own documentary in my previous post).
Now my beautiful daughter Gabbi (see the BIG smile on her face?) is being courted by Derek, who turns 18  in June, two days after she turns 17 (Do I hear, "You are 16, going on 17"?). Next to Derek is Sarah, and his sister Courtney, Gabbi's two best friends. We were celebrating the college graduation of Chris and John Duda, other members of our community, who had a massive party capped by a sing along around the campfire. What a wonderful evening it was.
In two weeks, we all will be camping in a state park singing and praying the rosary around the campfire, with about 300 other Catholic campers, for the annual Catholic camp-ar-ee.
How blessed we are to live here!

Gabbi gets more beautiful every year. I am so happy she is "courting" and the young man and her friends look like good people. Tonight my daughter is the only one not going to the 8th grade Catholic school dinner-dance because I feel at 13 it is too young to start courtship behavior. I hope at 17 she realizes I was right. You are a great mom.