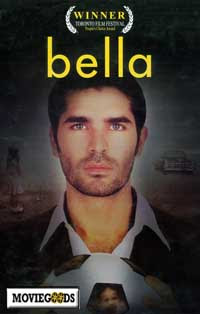 e wanted to get to the Catholic Underground since I first heard about them at the Friar Suppliers picnic last September. Friar Suppliers collect money, then purchase food and supplies to feed the Franciscan Friars of the Renewal. I finally made it last Saturday, and was thrilled to pull up to the beautiful church of Our Lady of Good Counsel, and see the Sisters of Life walking in. The church was in darkness, except for Our Lord in the Monstrance, and we spent an amazing hour singing "O Come Let Us Adore Him" and listening to meditations from one of the Irish friars. Confessions were ongoing, and the hour ended with Benediction.
After filing downstairs with the large crowd of younger New Yorkers, we were greeted by a band, pictured here, of Friars who surprised my daughter, as they really rocked!
We share coffee, and met some on fire Catholics, then listened to a talk by the producer of the film "Bella". He told of leaving a prosperous career as Latin American business mangaer at Fox studios to begin Metanoia Films (Greek for conversion). "I wanted to make films that if the Virgin Mary sat next to me during the screening, I wouldn't have to cover her eyes."
He described ho 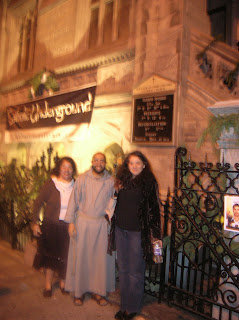 w the star, Eduardo Verastegui, the Mexican Brad Pitt wanted to make a film where Latino men weren't portrayed as gangsters or Latin lovers, so took part in the production of the film.
"Bella" came to the one of the producers as a sort of vision while driving from Arizona to LA, which left him wiping tears away as he drove. It was shot in 24 days in New York, while the producer and Verastegui stayed in the Friary, and attended daily Mass in the trailer. Catholic symbolism is interwoven throughout the film which is wholly pro-life (see review) but the producer Leo Severino(see picture) asked us not to call it a pro-life film, as that may limit it's audience.
It's artsy, colorful and emotionally complex, and not at all preachy, yet because it has a pro-life perspective, he's hoping it doesn't get labelled and sidelined.
Well, the audience at the Toronto Film Festival didn't think so. They gave it the People's Choice Award, over 3.499 other films, an honor shared by films such as "The Princess Bride" and "Life is Beautiful", who went on to win Oscars.
"Bella" is due for release in April, and there will be a 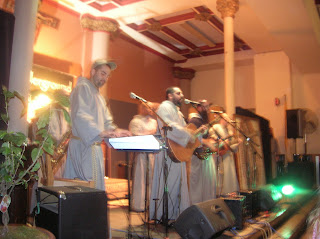 premiere beforehand, which I will be attending. This sort of engaging the 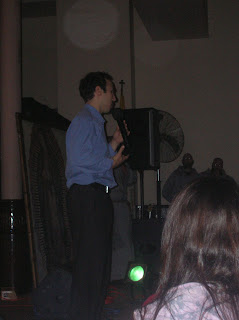 culture is just what Pope John Paul II encouraged us to do, as part of the New Springtime of Evangelization. Encourage your family and friends to see
"Bella", and watch the movie's haunting theme of unconditonal self-sacrificing love, and engaging Latin American culture, touch the hardest hearts.

One of the pro-life e-newsletters I get mentioned "Bella," and I went to the website and saw the trailer. It was so awesome I watched it several times. I can't wait to see the movie. How lucky you are to go to the premiere!

The band sounded great and the movie even better! I hope it shows somewhere near us.

I will be helping to publicize the film, so check out the film site, and this blog for local theatres, most likely in April.