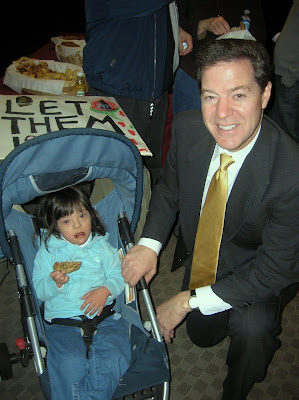 I usually go online after everyone has gone to bed, as do many of you, from the traffic I see on my blog(which has tripled in the past two days of my March for Life coverage, thanks!).
Last night, I was sneaking downstairs to write an endorsement for Senator Brownback from the perspective of a Catholic mother of a special needs child. I often get ideas during adoration of the Blessed Sacrament, and try and write them down as soon as possible afterwards, before I forget them, however, Christina, and began to cry before I had a chance to write, so I went upstairs and fell asleep with her.
This morning, I found some traffic from Students for Brownback on Causa Nostrae Laetitiae, my political blog.They had already found my endorsement there, and posted it on their website.They highlighted, as has the Washington Post, and People for the American Way, Senator Brownback's mention of Christina in his talk at Bloggers for Life.
So, in her own small way, Christina has become a voice for the voiceless, the unborn Down Syndrome child who has an 80% chance of being aborted. This is even more urgent since the ACOG(American College of Obstetricians and Gynecologists) have recommended that all pregnant mothers receive a new type of screening for Down's, which will result in some to the 20% who survive being aborted. You go, Christina!
Senator Brownback has garnered the endorsement of Fr. Frank Pavone, of Priests for Life, Dr. Alveda King of Silent No More, and Dominoes Pizza magnate, and Ave Maria University Founder, Tom Monaghan. I am honored to join such august company in endorsing Sam Brownback for president!
Posted by Leticia at 11:16 AM

Some links celebrating the beauty of kids with Down Syndrome:

Thanks for the links, Grannygrump! I knew about Band of Angels,(love the name, I spoke to it's founder and she said it did come from "Swing Low Sweet Chariot") but Downi Creations is new to me.

Thank you for your photos and posts about the March for Life. How I wish I could have been there. That's great news about Sen. Brownback mentioning Christina. Such an impact she is having already in her young life!
I read George Will's article. Have you read the piece in the Chicago Tribune about the mother educating her Ob about DS?
I'm starting to mobilize a group of moms with children with DS to educate their doctors about DS. If we can each change one heart and mind at a time it will save lives. I'm also recommending parents to write letters to the editor to the CT newspapers to condemn ACOG's decision.
Funny thing is, I'm coming across parents who are pro-abortion, yet are having difficulty reconciling these views to what ACOG is doing. Have you run across this as well?
I love your two blogs. Keep up the good work! Judy M.

Judy, I've tried to be a liason for expectant mothers with a diagnosis of Downs, giving my name to professionals around Long Island, telling them to refer patients to me for peer support. In nearly five years, not one has called me, thus these two blogs.

I like the idea of the lettersthough, I live accross the Sound from you, and I could try to cover LI. I think Newsday rejected my letter this week on this subject, but I'll try the Long Island Catholic and Suffolk Life.
I admire your goals, and yes, the pro-abortion attitude is everywhere.Doctors tend to be arrogant when laypeople try to educate them. I tried to give a doctor a book once, and he threw it at me!

I'll keep you informed about our progress in CT. I'm writing a letter to the editor of the Hartford Courant to present a parent and doctor pro-life view of this (pray that they will publish it). I tell people that if your doctors won't listen to you, talk with your feet and find a pro-life doctor!
I have been visiting several blogs written by moms of kids with DS and except for yours, most seem to scream "I'm pro-choice, and I wouldn't want to take away anyone's right to choose..."!!

Did I tell you how beautiful your daughters are? Another coincidence I found while reading through your blogs..I too am married to a refugee; my husband is from North Vietnam and came here with his family during the wave of boat people during the 1980's. They are devout Catholics, and I have learned alot about my faith through them!
Judy

It always sends a chill down my spine when I see mothers of children with Down Syndrome who don't judge other mothers' decisions to abort these children.
Understand their anguish, yes, but justify their actions, never!
You have inspired me to write a letter on the DS testing. I'll keep you posted!

Sweetheart,
I have been where you are now many years ago. I fought so hard for my baby sister to have the life she should have now. We are two years apart but so much alike. The one thing I have learned especially where I live is that these children and adults are to be cherished. They are also not for everyone. It takes work, persistance, love, not to mention great faith to raise these children.
I recently went with a social worker to the hospital to recieve a downs syndrome baby that was left in the dumpster after almost being beaten to death. I brought him home and cherished him until he was adopted by a great family. I cannot imagine anyone doing this to a warm caring baby that would grow up to be beautiful.
All I am saying is keep the faith and allow God to work his miracles for you because you have one with you always now.