New Attacks on Down Syndrome Children

This week the National Catholic Register has an article on it's front page entitled:"Down Syndrome in the Crosshairs" about the Canadian doctor's organizations doing what the American College of Obstetricians and Gynecologists had done last month: recommend that all expectant mothers undergo a new screening for Down Syndrome. Currently 90% of Down Syndrome babies are aborted, this would bring it closer to 100%. One cannot help but wonder if the aim of both doctor's groups is to rid the world of these lovely people. Melinda Tankard Reist seems to think so. In her book, Defiant Birth: Women Who Resist Medical Eugenics, she states the following in her introduction,
"Eugenically influenced medical advice appears to have become the norm, though it may not be recognized as such. The practices outlined in this book are part of what has been described as 'the infiltration and immense power of medicalization during routine pregnancy care'(Markens et al., 199, p368)
Even healthy women are made to feel there could be something very wrong medically with their pregnancy. A friend, healthy and pregnant with child number three, told me that she was encouraged to have a nuchal translucency screen to test for Down syndrome, because, 'after all, you are 27'".
This book is riveting, the stories inspiring and heart-rending, and after reading it, your opinion of the medical profession is forever changed. To quote Dr Abby Lippman, Board Chair of Canadian Women's Health Network,
"Today's society demands physical perfection from all and regards medical and scientific technologies as saviours to be embraced whatever the cost. To have a child who has been diagnosed with a disability is deemed not just unnecessary, but careless and even immoral".

This is the author whose book will be featured in the upcoming issue of Faith and Family magazine, and my story about Christina's birth will be attached as a sidebar to the main article.The book is a collection of testimonies from women whose doctors put them under intense pressure to abort their children, after receiving an adverse prenatal diagnosis.
Some of these children had been misdiagnosed, and were born completely healthy. Some were mothers who were disabled themselves, and the medical community felt were too much at risk of producing disabled children to have the right to give birth. If you know someone in this situation, please refer them to Pre-natal Partners for Life or Be Not Afraid both completely pro-life websites dedicated to helping expectant parents in these difficult situations. 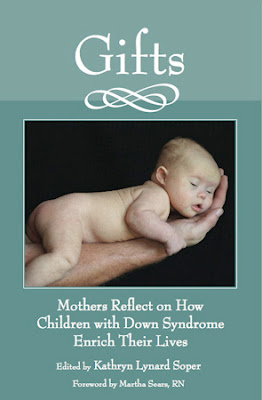 Another approach to the attack on Down Syndrome children is to highlight the beauty they bring to our lives. Gifts: Mothers Reflect on How Children with Down Syndrome Enrich Their Lives does just that. Last night I had a fascinating discussion with Robin Roach whose son Bryan is featured in this book. Robin had a sonogram which revealed a 'soft marker' for Down Syndrome, but went through with the Amnio anyway, just to reassure herself that all was well. But it wasn't. Before her Obstetrician had a chance to discuss the test results, the Perinatologist called to "schedule the procedure". Robin and her husband were in shock; they hadn't even been told their son had Down Syndrome, and already she was being pressure into an abortion at 22 weeks gestation.
Thankfully, the Roach family are Catholic, and wouldn't abort their beautiful son. Bryan, now 2, and cruising the furniture, is the joy of their active family of three boys, and they can't imagine life without him. Robin's participation in an online message board gave her the idea for the book where 35 mothers she knew from there wrote in about the blessings of having a child with Down Syndrome. Kathryn Lynard Soper offered to edit the book, and Martha Sears, herself a mother of a son with Down Syndrome, and a famous baby expert who has published numerous books with her husband Pediatrician Dr. William Sears, has written a forward for the book. It was first self-published and sold on Amazon.com, but Woodbine House picked up on it within 2 months, and will be publishing it in July. Robin's blog is called We Call Holland Home. Her recent presentation at the Long Island Coalition for Life was covered by " The Long Island Catholic".
I look forward to being able to read this book in the near future.
Posted by Leticia at 8:26 AM