I was sent with Isabella, and another student and teacher to represent St Joseph's School at Catholic Schools Day in Hartford. We were there to protect state subsidies to Catholic schools such as bus transportation (in CT only the town you live in provides a bus, in NY you were bussed within a 15 mile range) and funds for school nurses. There is also a bill to allow businesses tax credits if they contribute to a scholarship program for children in poor areas to attend Catholic schools. This would include several towns where students at St Joseph live.
Rep Chris Coutu is not intimidated by being a minority Republican, and enthusiastically promoted this bill among his colleagues while we were there. He attended a meeting in Norwich where the imminent closing of 102 year old St Joseph School was discussed. With Superintendent Shine and Asst. Supt. Sr Barbara Gould, (see photo) we discussed the closing of many area Catholic schools and the negative impact it has had on the community. One aspect we stressed was the economic burden ($15K annualy) to educate the Catholic school students who enter public schools. 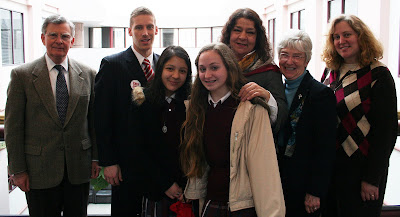 Catholic schools, especially faithful schools like St Joseph, are a boon to the community, and it's time they were given a break. A tax break with no strings attached.
I will keep you posted here on the progress of this bill.
Thank you Rep Coutu for supporting Catholic shools in CT