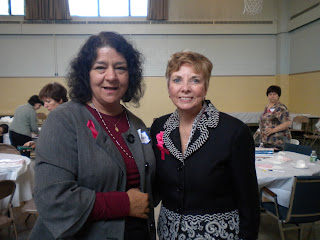 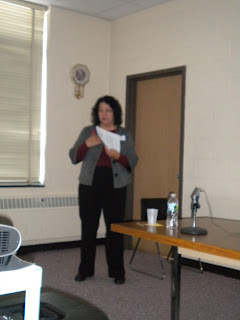 I gave a talk entitled, "Winning the War for Hearts and Minds of Youth" to encourage pro-life leaders to evangelize the youth in their parishes with the Gospel of Life. It was well attended, and there were many good questions. Afterward I enjoyed a talk given by Fr Brian Mullady, OP of EWTN fame, who gave a good explanation of Pope John Paul II Theology of the Body. the other keynote address was by Dr Marie Hilliard
of the National Catholic Bioethics Center (in the photo with me).
Dr Hilliard spoke about ethical challenges in health care. The most devastating challenge she described is the Groningen Protocol. According to Life Site News it is, "The protocol - the full name of which is The Groningen Protocol for Euthanasia in Newborns - lays out a set of guidelines that must be followed in making and executing the decision to kill a newborn infant."
The excuse to kill the newborn is that they have no quality of life due to a disability, and it is masked by false compassion which says they are alleviating suffering. It is murder, pure and simple. Life Site News states,

The conditions that would allow babies to be killed in these circumstances include: "progressive paralysis, complete lifelong dependency, and permanent inability to communicate in any way."

"The whole point of the protocol is to help physicians end the lives of newborns who are so severely afflicted that neither their dying nor their living should be prolonged. That being the case, the pertinent distinction is not between babies who will die and those who could live, but between babies for whom life-ending decisions should be made and those for whom such decisions cannot be morally justified. In bringing within its compass babies who are in no danger of dying - and, indeed, with proper care could live to adulthood - the protocol is even more radical than its critics supposed."

This news is haunting me, and I can't believe that I hadn't heard about it before this. I try to stay abreast of news affecting the disabled, but this one slipped by me. According to Life Site News it was deliberate. Scientists at The Hastings Center, the most prestigious bioethics center in America, where Dr Ezekiel Emmanuel, President Obama's health czar is a member, defends the Groningen Protocol. Don't be surprised when it surfaces in the Obamacare.It does, after all, save the medical establishment millions.
I am increasingly called to study for my Masters in Theology with a concentration in bioethics, available online at Holy Apostles College through a cooperative program with the National Catholic Bioethics Center.
Read more about it at the Vatican Website.

UPDATE Nov 15: here is a very positive post about my talk from the  Roberts Rock Farm.