The Chronicles of Narnia: The Children's" Passion"? 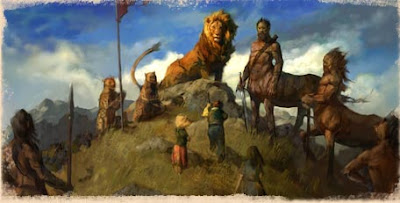 Children trapped in a terrifying world of air raids, and night time bombings, caught between clashing forces beyond their understanding. Shipped off to remote places in the country, with forbidding, invisible hosts. This is the prelude to their entry into a fantasy world called Narnia.
Suddenly, they are handed roles in a titanic battle to vanquish the dark forces which have enveloped Narnia. Lord Aslan, whose return has been foretold, sets up his camp in Narnia. Empowered at last by his faith in them, the children spring into action, finding the hero within, all except for Edmund, who proves weak-willed in the face of temptation, in the form of Turkish Delight. Their eventual triumph, along Edmund's redemption lent hope to children in post-war Britain, and to children of a post 9/11 world of similar fear and uncertainty.

The Chronicles of Narnia has been called "the children's passion", for it's role in introducing a Christian-inspired film for general distribution. Producers agonized over whether to include C S Lewis's Christian symbolism in Aslan the lion king of Narnia, who dies in a crucifixion-like scene and is resurrected. The director and cast, when queried, denied direct attempts to use Lewis' religious symbolism.
Steve Greydanus of DecentFilms.com opines:

In the end, Lewis’s omnipotent lion does come to life in grand fashion on the
screen — along with much of the book’s religious meaning (though not all; for
more, see full review, coming soon). It’s also worth noting that, in spite of
all the reluctance to talk religion, the religious importance of the stories
hasn’t been lost on Disney, which hired Motive Movie Marketing to run the same
kind of grass-roots outreach to faith-based groups that proved so successful
with The Passion. Promotional events at churches have coached pastors and
leaders on using the film to do outreach in their communities.
After years of chilly relationships between Hollywood generally — and Disney in particular — and certain segments of American Christendom, LWW could represent at least a partial thawing. For Christians who’ve felt for years that Hollywood wasn’t
willing to acknowledge their existence, Disney’s church-based overtures may be a
welcome sign of change. For their part, Disney executives must surely be
delighted to have a film, or even a franchise, with the potential to bring in
even viewers previously determined to avoid anything with a Disney logo.
At the same time, religious considerations have to matter to Hollywood not just in
the marketing process, but in the creative process. Filmmakers don’t need to
share the religious views of a Lewis or a Tolkien to adapt their works, but they
do need to be willing to try to understand and honor the relationship of those
views to the work. If that ever caught on, the thaw might become a springtime.