Eucharistic Adoration is the Cornerstone of my Spiritual Life 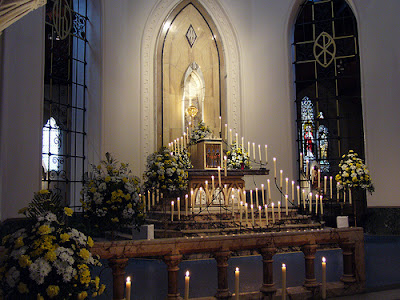 Intentional Disciples has started a discussion on Eucharistic Adoration experiences. It's a growing trend which gives me tremendous hope in the future of the Church. Here's my love story between myself and Jesus in the Monstrance.
Eucharistic Adoration is the cornerstone of my faith life, besides the Holy Mass. I first attended in my twenties as part of a 40 hours prayer campaign for my parish, and I was struck by my feeling of closeness to Jesus. When my husband was courting me, he told me he was going to introduce me to his "best friend"; I was awestruck when he took me to visit Jesus in the Blessed Sacrament. I knew then that he was a keeper!
During the first year of our marriage, we lived near a Perpetual Adoration chapel. Every argument we had as newlyweds, found us going there, one by one, and finding reconciliation.
When, six months after our wedding, I was unemployed; I had no insurance and my husband's job was seasonal, ending each winter, I was delighted to find myself pregnant. I ran to Adoration to say "Thank you and help!" The next day I found a job with insurance which completely covered the birth of our first child.
Once, at forty hours adoration, I saw a young woman, who has Down Syndrome, lying prostrate before the Monstrance. "How many mothers would give their right arm for a daughter like that, Down Syndrome or not?!" I thought.
Within four years, I was a mother like that with a daughter with Down Syndrome. I took her to Adoration as a baby in her car seat, but, as a roving toddler she came less frequently. One day in Advent, I took a chance and brought her into the adoration chapel.She waved enthusiastically at the Monstrance saying, "Hi Jesus!" and I patted myself on the back for teaching her about the Real Presence. Until, when we were leaving, and she again waved, and said,"Bye Jesus!" As if she saw Him standing there. That was an awesome moment, to realize that Christina and Jesus had a relationship independent of her mother. Thanks to Adoration, one of the greatest blessings of my life!
Posted by Leticia at 10:38 AM