The patron of Christian artists was born around 1400 in a village
overlooking Florence. He took up painting as a young boy and studied under the watchful eye of a local painting master. He joined the Dominicans at about age 20, taking the name Fra Giovanni. He eventually came to be known as Fra
Angelico, perhaps a tribute to his own angelic qualities or maybe the devotional
tone of his works.
He continued to study painting and perfect his own techniques, which included broad-brush strokes, vi 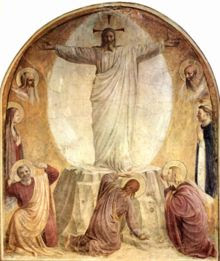 vid colors and generous, lifelike figures. Michelangelo once said of Fra Angelico: “One has to believe that this good monk has visited paradise and been allowed to choose his models there.” Whatever his subject matter, Fra Angelico sought to generate feelings of religious devotion in response to his paintings. Among his most famous works are the Annunciation and Descent from the Cross as well as frescoes in the monastery of San Marco in Florence. He also served in leadership positions within the Dominican Order. At one point Pope Eugenius approached him about serving as archbishop of Florence. Fra Angelico declined, preferring a simpler life. He died in 1455. HT American Catholic

I was fortunate to have an Irish friend who worked at the Political Institute at San Domenico de Fiesole, teaching English to the political studies students. What a life he had, living in a cavernous 200 year old farmhouse (or was is it a barn?) driving to the cafe through the Tuscan 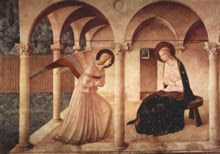 countryside which looked like the background for a Da Vinci fresco, for a breakfast outdoors of Italian pastry with a breathtaking view of Florence, teaching English till noon, and having the rest of the day to explore the artistic treasures of Florence, a living Renaissance art museum, with a famous church around every corner. We went to a Bach concert in a baroque church one evening, walking the packed streets of Florence, where the lively social life happens outside in the shadow of amazing architecture, like the Piazza della Signorini, with its famous bell tower. Florence is intoxicating, and I couldn't bear to leave it for 2 weeks, even to accompany my Austrian friend to Pisa for a day trip. I fell in love with the churches, the p 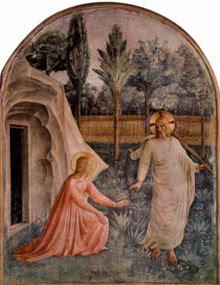 eople who are so easy to meet despite my poor Italian, and the art which never ends.

Fra Angelico's work is everywhere in this, his city. I was particularly enchanted by the monastery of San Marco, for he had painted a magnificent fresco in every cell(pictures here are all from San Marco). It had been inhabited by one of the powerful Medici family, thus explaining such opulence. My favorite was a painting of the Easter women peering into the Tomb of Christ, searching for his body, while He floated above them, beckoning them to look upwards. 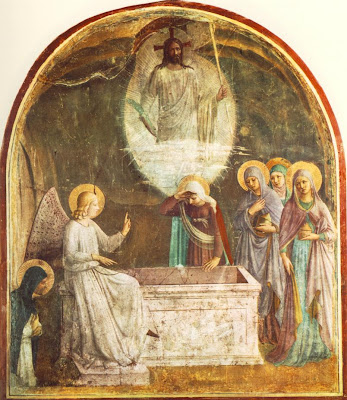 Now being a talented artist didn't qualify him for sainthood, however, from his life story it seems that Fra. Angelico, the angelic friar resisted the temptations which abounded in Renaissance Florence, temptations to pride at his success, to wealth, and glory. To be recognized for greatness during your own lifetime has been the root of the spiritual downfall of many famous artists(Pablo Picasso, the famous misogynist springs to mind).

May the Lord always free me from the desire of having my work exalted, and receiving praise. Fra Angelico, pray for me.