I had been looking forward to seeing the movie Miss Potter for two months, frustrated with it's elusive release date, and when at last I found a showing, over an hour from my home, I raced to a tiny theatre in a quiet village through lacy snowflakes, trailing a troupe of little girls and their mother behind me.
My pursuit of Miss Potter has been a work of reparation for an author I had resisted reading as a child. I can still see the little green books on the shelf in my school library, which were routinely selected by all the other third graders, but I was obstinate, refusing to read them, and be part of the crowd. Now, that I've seen the movie, I realize that Beatrix would have applauded this starchy, independence, even though it took longer for her enchanting little tales to enrich my life.
But who in this culture, or around the world for that matter, has not heard of Peter Rabbit, 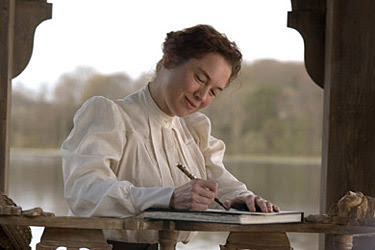 or become familiar with Miss Potter's friendly little renderings of ducks with bonnets, cheeky red squirrels, naughty bunnies in blue jackets, frisky red squirrels or fishing frogs?
My Latin American students at the college smiled in recognition when I mentioned "Pedro el Conejo" and I read that in Japan, where her books have always been popular there is virtually a "Potter Mania" as a result of this film.
Beatrix Potter's work has become a quintissential part of the culture of childhood, and I have often enjoyed reading "The Great Big Tresury of Beatrix Potter" with my three daughters. I might just look for those little green books again, now that the film is out. . .

The film shows Beatrix(Renee Zellwiger) as the quirky spinster daughter of a social climbing parents in their posh Kensington mansion in London, who try to set up a marriage for her with homely gentlemen of means. Her parents humor her when the little animal stories and paintings become increasingly important, as do the brothers at Warne Publishing, pushing off her manuscript to their inexperienced younger brother, Norman Warne, warmly played by Ewan McGregor, (any relation to Farmer McGregor?).The remarkable success of her first book takes everyone by surprise, especially her mother, and Beatrix is suddenly a woman of independent means. She has impressed the English reader, forging new paths for Victorian women, yet never stopped being the slightly dotty, visionary artist of whom Mr Warnes has become so fond. 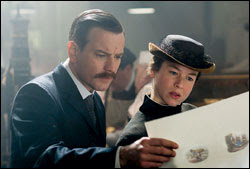 There is nothing more attractive to a woman of literary talent than a man who appreciates her work, and soon a romance is born, much to her parents' consternation. I found the romantic scenes quite Victorian in their delicacy, yet touching in the quiet respect with which Norman treats Beatrix, even agreeing to a separation to concede to her parent's wishes that they spend the summer apart, to see if they were truly in love before they marry. His love letters send her into transports of joy, on the tranquil shores of her summer home, until unexpected tragedy strikes.

As a fellow writer, I enjoyed the movie's portrayal of the relationship of Beatrix to her work; her cozy farm cottage with her painings prominently displayed, her cluttered studio, her utter abandon of her physical appearance as she is transported by her stories, anxious to discover where they will take her. Her whimsical interaction with the animal characters in her tales, which in the film are animated, to the delight of the little girls with me at the preview, make Miss Potter, a rare glimpse into the mind of a literary icon of our culture.

Miss Potter will be enjoyed by her worldwide fans, like Shannon, whom I met watching the last of the movie credits, who had seen the movie in Manhattan the day before, in a packed house which gave the film a standing ovation. She is not only an avid collector of Beatrix Potter china, which she used daily for her daughters, but she took them to visit Hilltop Farm, Beatrix's home in the Lake District of England, which is part of the 4,000 acres she donated to the National Land Trust of Great Britain. This is a trip I never made during my time in London, but now that I have three little girls, I look forward to taking the tour some day.

I recommend that all lovers of children's literature, tender love stories, and breathtaking mountain scenery make the excursion to see Miss Potter, and spend some time in her cozy corner of Cumbria.
Posted by Leticia at 8:45 AM