Baseball is as American as Apple Pie 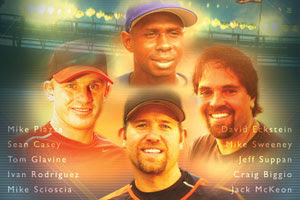 And, according to Russell Shaw, it can be Catholic as well. Writing for Catholic Exchange, who produced the film "Champions of Faith: Baseball Edition" in conjunction with American Family Films, Shaw says,
"It blends from-the-heart interviews with men of simple eloquence with skillfully edited footage of what is, hands-down, America's most breathtakingly beautiful game.
It's the ballplayers — plus a manager and a coach — who supply the message here, speaking unaffectedly but with great impact in their own words. Names like Mike Piazza, David Eckstein, Jeff Suppan, Mike Sweeney, Jack McKeon, Rich Donnelly, and others who appear more briefly in the film will be familiar to fans. Less well known perhaps is that these are genuine men of faith. Watch the trailer here (don't be dismayed by having to fill out your contact information before viewing the trailer, it's well worth the effort).
Posted by Leticia at 7:46 PM