A Return to Modesty 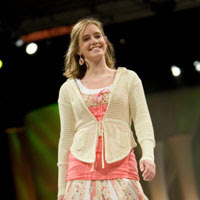 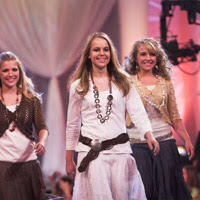 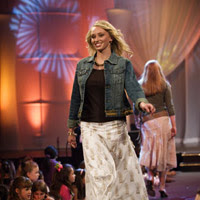 Colleen Hammond, the author of Dressing with Dignity, tells girls that their choices could transform our nation.
Despite the devastating influence of today's culture, some are trying to teach girls they don’t have to dress immodestly in order to be true women.
“It’s fine to follow some of the fashions just as long as we realize that you don’t want anything too tight, nothing too clingy, nothing too sheer and just make sure that ‘from the shoulder to the knees, nobody touches, nobody sees,’” author Colleen Hammond told Family News in Focus.
She said girls need to understand that their choices can influence others.
“We’ve learned from history that as the morality of women declines, the culture follows w

ith it,” Hammond said.
Pure Fashion attempts to help girls with modest choices and has hosted 13 modest fashion shows around the country this year.
“We’re not necessarily afraid of the body. God created the body, and it is good and it is holy, and it is sacred,” said Brenda Sharman, national director of Pure Fashion. “It’s just that we want to have a reverence and a respect for the human body.”
HT Citizen Link
This kind of talk is music to the ears of mothers, who, like myself have a beautiful teenage girl who is bursting on the social scene, dying to express her taste and decorate the lovely form God has given her. Instead of keeping her under wraps in a shapeless jumper, where she is unattractive, and feels resentful that her beauty is somehow rejected, she can dress like the girls in the Pure Fashion show above, feminine, hip, and MODEST! This is the Theology of the Body in practice, being respectful of the gift of our bodies, treating them with dignity, while not tempting our neighbor's sons into sin. For my three daughter's sake, I pray for movements like this. They seems to be catching on.
Last week, Laura Ingraham had a discussion with Wendy Shalit, who spoke about her new 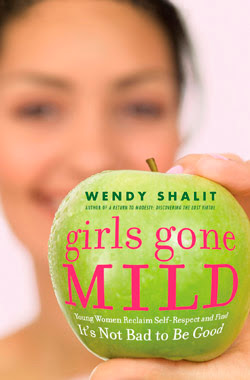 book, Girls Gone Mild, a take-off on those exploitative videos of poor girls with no self-esteem."It's about how people misunderstand the 'good girl,'" she said in an early July interview here. She believes society often ostracizes these girls or views them as "people pleasing." Instead, she said they are actually "rebels" in choosing to go against teachers and parents to live a chaste lifestyle.
Shalit wants to provide an opportunity through her book for these young women to share their stories and become role models for other young women.
HT Catholic News Service
ABC News and Newsweek are taking notice. Let's fan this flame!
Last night, at the opening prayer meeting/Holy Hour healing service for Youth 2000, I was spending some time with Fr. Terry of the Franciscan Friars of the Renewal. He remembers my three girls from Divine Mercy Sunday, when he complimented Gabbi's care taking of her little sister, Christina. This time, he put his arm around her and told her how pretty she is, and how, when young men come to her and tell her this, not to be deceived, as often their motives are impure. To be careful and protect her beauty. His eyes welled up with tears, as he contemplated her pristine innocence, as he recalled, in his heart the tragic stories of other lovely young ladies, whom he has ministered to, whose childhood ended in tragedy in the mean streets of New York. Instead of idolizing these girls in rap videos, we should pray for them. Pray for a return to modesty, for a transformation of our culture. In 1917, Our Lady of Fatima told the visionaries that there were many fashions that offend our Lord. In 1917! Can you imagine how the dress of today's men and women offend Him?!
Posted by Leticia at 10:44 AM

Great post! You did a wonderful job covering this topic. A change in modesty would make such a difference in today's society.

I highly recommend Colleen's book! I reviewed it a few years ago and learned so much about modesty and fashion from it.

Thanks for sharing the info on both books.

What a coincidence! A friend of mine lent us that book yesterday and I was reading it last night. I was appalled at some of the facts and statistics. It really makes a girl want to dress as modestly as she can at all times.

Awesome post. Change the clothes and change the mindset. Along the same lines would be to concentrate on education of our girl children in math and sciences. It will be the women that save the world.

Visiting from the Carnival of Family Life.

Great topic! You may also be interested in The Carnival of Modesty, currently hosted by The Space Between My Peers. There's lots of good articles in the carnival.

I have found it easier in the last few years to find clothing for myself and my daughters. because of the "long tail" effect of the internet, supplies are not limited to what they can sell in a small local market.

Just google "modest swimsuit" and a multitude of options are available. We are no longer limited to what I can find in a local store.

Just don't Google "modest clothing" with your daughters around! We got a website with Muslim, Amish, Hasidic, and Catholic modest clothing, and they were rolling their eyes at me!

Great article and review!! My girls are very young, 4 and 6, and still I have to work hard to avoid immodest clothing even in their age group.

I once saw the History of Barbie on A&E Network, and she WAS based upon a German prostitute doll in the 1950's. We prefer the American Girl Dolls for our 10 year old.

That is a great message for girls today. I think girls are afraid of the "good girl" label and too concerned with dressing and looking like all their classmates. Girls need to know that being a strong and beautiful woman starts on the inside and you don't have to wear clothes too tight, too short, and too revealing to get attention.

It's great to see modesty back in the news, and the interview I did with Focus on the Family (that Letitia quotes above) earned me a place as a member of the Vast Right Wing Conspiracy:

I've been interviewed these past two weeks by news outlets from all over the world, but what concerns me is that manufacturers are starting to see a 'market for modest clothing' and are producing and selling clothing that they label as 'modest' that aren't decent...even being labeled "hot and modest". I Blogged about it here:

Like Letitia said, shop a bit and select a few outfits before you show your daughters. That's one of the reasons I did my other Blog--to show fashions from the runways of Paris that fit the Vatican Guidelines:

Keep in mind, too, that a woman's real power is in her virtue--obtained and sustained through the grace of God. When we raise our children to be pure, humble, and charitable, the rest of society benefits as well.

Great post. It is interesting, too, that girls who dress stylishly yet modestly get an entirely different kind of attention than those who don't. It is something girls need to realize! It is so much nicer.