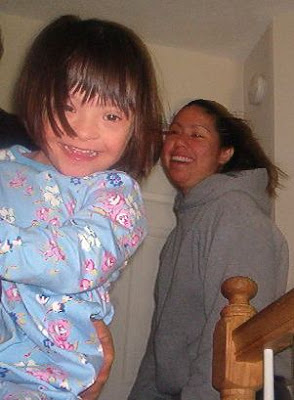 Vicki Forman, the special needs mama at the blog, Literary Mama shares the difficulty cutting her son's fingernails. I have struggled with how I have to handle my 5 year old daughter Christina sometimes, as she has sensory issues on top of Down Syndrome, and simply brushing her hair can bring on a meltdown. (Who am I kidding, it usually does!)
I rarely take her for haircuts, because there is only one woman I have ever met who has enough patience to take the time to cut her hair a bit at a time, and keep her calm, a saintly mother of nine, who is a hairdresser, and she lives FAR away from us. At times, I've considered making the trip just to have a daughter whose haircut looks like her parents care about her. I'm sick of explaining why you can't see her eyes, or she has odd-looking bangs, which I cut while she was asleep!
In order to do the simplest everyday tasks, like brushing her teeth, sometimes, she accepts the toothbrush willingly, other times, I have to pin her down and brush them myself. She has never made it through a hygienist exam. I hate that, but when she has her mind set, there is no amount of coaxing that will convince her that the bright red medicine will taste good, and make her feel better, or that traveling in the car seat will save her life, or that running headlong into our busy street will be safe. Mom has to be the enforcer. The bad guy.
I often wonder how I would cope if she had some serious health issues which required painful tests, I think of poor Vicki's son and shudder. Last year, we decided that Christina would enjoy adaptive horseback riding, se we had to get her spine x-rayed, to see if her spine was stable enough to withstand jarring. We had to return for the x-rays since she kept moving and the first x-ray came out blurry. It was partly the technician's fault, she was an older woman who seemed to believe that a good child would hold still till she was safely positioned to flick the switch, and took an eternity to get ready; I was nearly hanging Christina by her thumbs to get her to be still.
Why couldn't she team up with someone, get Christina ready, and be ready to flick the switch quickly?

So, dear medical professionals, next time you suggest yet another precautionary test for Christina,' just to fill out her medical record', I'm not going to be polite, like I was last year, and submit her to a series of tests which were inconclusive for her lack of cooperation. I have better things to do with my summer vacation this year.
I'm going to look you in the eye, and ask, "does she REALLY need this audiology test? It's gonna cost me!"

In fairness to myself, I must add that I have just purchased another pediatric medicine spoon, to try and smooth over the battles in this area. And I neglected to mention that ordinary doctor visits are going smoothly, thanks to Elmo's doctor video, and lots of role play with big sisters at home. If only the waiting room wasn't divided into sick and well children areas! Why does she HAVE to go to the one she isn't allowed in?
Posted by Leticia at 9:23 PM

Leticia, for the liquid medicine...many of the meds now come in strips or tabs that can be placed on the tongue. Will you daughter take those easier? Our 5 yr old has sensory issues and getting him to take liquid medicine is a nightmare but he'll take the strips without nearly as much struggle as long as he has a cup of water in his hand.

Does your daughter like taking baths? That's how we are able to cut our son's hair.

Michelle, the strips get spit out as does the liquid medicine, about half the time, unless Daddy can wheele her into it. He has the special touch with her.
I never thought of a haircut in the tub! If it works, I'll be forever grateful, and post on it!
Thanks for the tips.

When my son had to have a blood test, it took myself and two technicians to hold him while a third actually took the blood. He was a 40lb. 7 yo!

We put his pills in applesauce - they were teeny tiny - and somedays we'd go through 7 or 8 spoonfuls before it would get down.

I favor the squirt it in the back of their throat/push up on their jaw approach... it works more often than not when they are smaller than you are.

You know, I still use the tiny medicine syringes with all my kids! When you squirt back farther into their cheek, they can miss some of the taste - and sometimes they think it's fun to actually squirt it in themselves. I don't know if Christina would take to that, or not . . .but it's an idea.

Monica, I used to have a bag of those syringes from a pediatrician I babysat for, and I miss them. The new medecine dropper is a syringe, but not as fine-tipped as those. I wish I could get my hands on some real syringes!

I've got some! I can mail you a few -- yes they are well-coveted, my dear, but for you and Christina, I can cough some up. My husband has a cousin who is a nurse who is able to bring us a few from time to time.