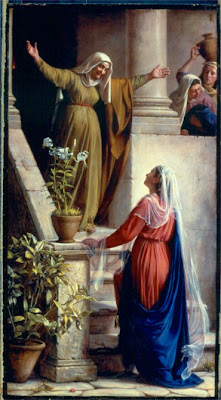 My six children are named for the Joyful Mysteries of the Holy Rosary. I am blessed with three lovely girls here on earth, and I look forward to meeting my three sons in Heaven. Kimberly Hahn in Rome Sweet Home wrote that because of the Communion of Saints, we can speak directly to our miscarried children in a special way during Holy Mass. (It was a great comfort to read this, since there are so few resources for mothers who miscarry. )
The names of my girls are:
Gabriela Maria: The Annunciation(named for the Archangel Gabriel and Our Lady)
Isabella Maria: The Vistation (in case you didn't know, Isabella is the Italian/Spanish version of Elizabeth)
Christina Maria: The Nativity (named for Christ and His mother)
I discovered the lovely Spanish custom of naming all one's children after the Blessed Mother, and couldn't find a better middle name. My entire name is Leticia Ann Marie Crafa Velasquez.

My children whom I lost in miscarriage are: (I don't know for sure if they're boys, but I felt they deserved names, and I ask them to pray for their family when I'm at Mass)
Patrick Simeon (left this world on St. Patrick's Day, named for Simeon of the Presentation in the Temple)
Theodore Joseph (left this world on my Grandfather Theodore's birthday, and named for St. Joseph, who searched for his foster son for three days till The Finding of the Boy Jesus in the Temple)
Juan Francisco(left this world on Good Friday, named after Francisco, his daddy, and St. John the Evangelist who accompanied Our Lord to the Garden AND to the Cross)
Sometimes, when I feel bereft to only have three children, compared to the many blessings my friends have, I remember that I will always be the mother of six. That sounds better!

In honor of the Blessed Mother's Visitation, let's pray her Canticle of Praise, the
Magnificat.

My soul magnifies the Lord, And my spirit rejoices in God my Savior.
For He has regarded the low estate of His handmaiden,
For behold, henceforth all generations shall call me blessed.
For He who is mighty has done great things for me, and holy is His name.
And His mercy is on those who fear Him from generation to generation.
He has shown strength with His arm:
He has scattered the proud in the imagination of their hearts.
He has put down the mighty from their thrones,and exalted those of low degree.
He has filled the hungry with good things;and the rich He has sent empty away.
He has helped His servant Israel, in remembrance of His mercy;
As He spoke to our fathers, to Abraham and to His posterity forever.
Glory be to the Father and to the Son and to the Holy Spirit.
As it was in the beginning, is now and ever shall be, world without end. Amen
Scripture text: Revised Standard Version - Catholic Edition

And the name Leticia is in honor of the joys of the blessed mother. It all fits together so beautifully.

We named our miscarried babies...see my profile...& for sure they intercede for us. We have a decade of children living still so are extremely blessed..God bless